LET'S NOT TALK ABOUT THAT

Shortly after the middle of the day I have another medical appointment. With a new doctor this time -- my previous regular care physician has gone back to school -- whom I haven't met before. After which, a tasty lunch, a cup of Hong Kong milk tea, and a smoke.
Don't know what I'll have to eat yet, but I'm certain about the pipe.

This new doctor will probably give me the lecture about how tobacco is bad for me, and I don't as yet know how to distract her from that. Chinese American women hate smoking, and though her patients must include a fair number of stubborn old coots who cuss in a foreign tongue and disobey at least that one bit of medical advice -- frequently lighting up the moment the hospital door has shut behind them -- it's almost a guarantee that she'll be opposed to a bad habit which keeps me sane and forces me to take long walks.


But doctor, if I didn't smoke, I'd never get any exercise!


I'll try to focus her mind on the peripheral angioplasty of the lower extremities which is a distinct possibility that I've discussed with my cardiologist. It's a fascinating process, which doesn't take very long, and will improve circulation and comfort levels. Let's talk about that, shall we?

The pipe for later will be in my coat pocket. 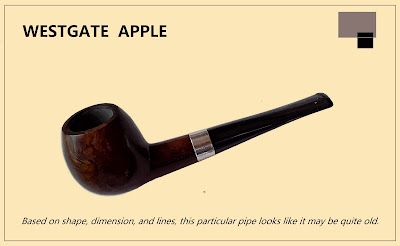 It's an item which I think is older than I am, probably by two decades or more. It has the look of something that may have been made between the early thirties and the mid-fifties at the latest. The brandname (Westgate) is unknown to me, and I'm guessing that it was the housebrand of a tobacco shop which closed a long time ago. Probably in a college town.

Imagine a young fellow at university, supplementing his income tutoring Latin.
Unlike me, he probably liked jazz. And had a collection of records.
As well as lots of sheet music.

He probably graduated from med school just in time for the war, and by the time he rejoined civilian life and had established a reasonably flourishing practice, he smoked cigarettes.

This is a fairy tale I will not share with my new doctor.
She doesn't need to know that doctors smoked.
Or at least not be reminded of it.

I actually enjoy medical appointments nowadays. It's human contact, with a whole bunch of people whose conversation is to the point, and who always wear masks.
And football is never mentioned.