Some readers may have gotten the impression, from one or two previous essays here (about haggis and Bobby Burns), that I bear ill-will toward the people of Scotland and their marvelous culinary achievements. A general distaste for things Scottish. Not so! Scotland is a great and wonderful country, far better than Northern Ireland or Wales, and much more interesting too! Well, except for Edinburgh, where some distant kin folks live, who were ungracious to my grandfather when he visited the uncouth sods after World War One. The less said about a place where crotch mildew, if left unchecked, eventually attacks the brain, the better.

And their food, while sometimes oddly named (almost unpronouncable), is delicious and unique. Cockaleekee. Haggis. Partan Bree. And killer rabbit.

Scotland is a place well worth visiting, assuming that you have no relatives there.


"A spectacularly beautiful land; brutal, like her people and their food."
-----Sir Arthur Grimbottam, upon visiting his in-laws during his only sojourn in Scotland.


I bear the robust and gallant people of Scotland no ill will.
Some of my best friends are from there.
As well as "kinfolk". 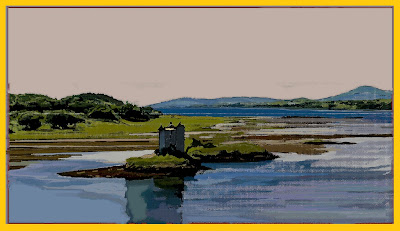 Of course, the next time I make haggis, which might be never, I shall probably experiment with a filling composed of glutinous rice and chopped pork belly meat, pinch of five spice, instead of the customary boiled sheep innards and oatmeal. It's easier to get those ingredients near where I live, whereas mutton offal and that oatmeal stuff sadly not so much.

Quite likely not any lapcheung, because while one or two pieces in lomaikai or joong are nice, it would take about a dozen whole sausages for haggis, and that would be boring amidst the fatty pork and rice. Soaked black mushroom and perhaps some water chestnut, as well as a splash of rice wine.

In fact, a Burns Supper with the haggis described above, plus stirfried oyster sauce mustard cabbage, several cups of hot strong milk tea, and a slice of Dundee Cake to follow, before going to the single malt, and omitting all recitation of "verse", would be lovely.

Email ThisBlogThis!Share to TwitterShare to FacebookShare to Pinterest
Labels: Scotland