What with being a mean-spirited old bloke who does not wish well on a great many people, my reactions to headlines and news articles today was, as you would expect, billious, superficial, and filled with nuggets of indigestible bitchiness. I am not good at parties, and you don't want your friends to ever meet me.

THE FAST FOOD CHAINS THE BAY AREA DOESN'T HAVE YET (BUT WANTS TO TRY)
SF GATE
Yeah no. Life is too short to eat garbage. But I actually read the article, and quite lost any remaining interest. People eat crap.

The caption of this essay refers to the bag of nimboos on the kitchen counter. Both last night and this morning, without actually examing them, they really did look like apples.
Lemons are more useful.

When life gives you lemons, you watch The Creeping Terror (1964, black and white). "Yes", these people think, "let's dance". And they do. The hootenany was bad enough -- you pray for the monster to hurry up and eat these people -- but then when it gets to the dance hall where white people are dancing, you realize that this is what life in that era was all about. Bad music, mechanical wiggling, sh*tty clothing, and absolutely no acting whatsoever. These people have no talent at all, and you are happy that they cluster themselves in what is supposed to be their frantic panic into a tasty clump in the corner for the slow-moving monster to eat. Good. "And how is it", your apartment mate asks, "that they all get eaten head first?" And "why are all of them heading toward the monster?" At times , the creature howls in frustration.
Sci-fi horror, low budget. A classic. Three stars.
World's stupidest victims. 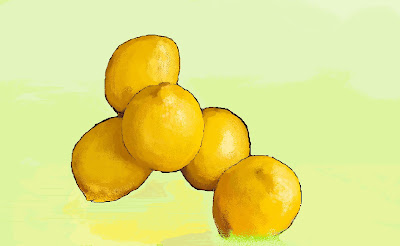 "Anyone who experienced that catastrophe would never go there again."

That era lasted from the fifties through the eighties.
I'm glad we'll don't have to do that any more.


"It was almost an hour before Caldwell learned of the monster's new attack."
------Narrator (Larry Burrell)


Normally, on holidays when I do not need to work I head over to a favourite Chinatown bakery. But I just knew that a coffee klatch would be there in till late afternoon, occupying the centre table for several hours, and considered that in any case I did not wish to be around a large number of people not wearing masks.

"The vastness of the universe is incredible; their home may no longer even exist"

We need the director's cut of this stinker.
The screaming is precious.