One should always tip well in Cantonese eating establishments to make up for the fact that Mandarin speakers tip like crap. The staff worked hard, the northerners and mainlanders left a mess and nothing or next to nothing for the effort. Their illustrious presence did not make up for that. They are pikers. Another reason to tip well is so that they will remember you favourably, and be happy to see you again.
At least, as a white guy that's always been my attitude. I've worked in restaurants, and I want my favourite places to continue to thrive, and the staff to remember me.

I mention this because there were TWO tables with mainlanders where I ate lunch.

And I overheard the comments after they left.


Yeah, I have no idea how other Caucasians tip there. I haven't ever seen any. The waitresses bring my milk tea, soup, and the bottle of hot sauce automatically, and the place is, once a week, home.
It's a chachanteng, and I ordered one of the sets (set lunches), the one with the sautéed almond sole (香煎杏仁龍脷香煎飯 'heung chin hang yan lung lei faan'), with rice, chowder, cup of milk tea.
The other two sets today were porkchops, and roast chicken. Choice of rice or spaghetti, coffee or milk tea. These are all things that white people would eat, but again, never seen any there.
I'm fine with that. I mostly avoid my own kind these days.
They spread disease.

[Gratuitous dig at Karens and their bitchy attitude about masks in public.]


The chachanteng is a Cantonese speaking environment, tea-time found me at a Toishanese speaking place. Well yes, they do understand Cantonese. And English, and Mandarin. But the other three tables were Toishanese, which I don't understand as well, and would have a hard time communication in. In a way it's kind of like listening to German; far away from Amsterdam and The Hague, and consequently not like the civilized Netherlandish of the urbane and cosmopolitan coastal zone. Almost as dense as some versions of Flemish.
Or Schweizerisch Deutsch.

[That too was a gratuitous dig, but this time at a sentient target.]

They have 年糕 ('nin gou'; new year cake) there, at being that time again. It's a celebratory confection made from glutinous rice flour, wich is soft, chewy and sweet, with a consistency that verges on stiff jelly. The nearest thing I can compare it too would be 'dudol', often made with the same ingredients, and also common as a festive item. 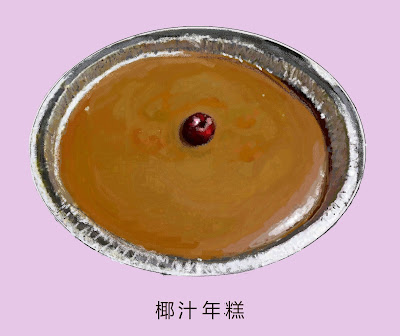 My landlady, who is Canto-American, seldom gets down to Chinatown. So I bought her one cake, and one for my apartment mate and myself. Coconut flavour.

As it turns out, it has been ages since my apartment mate had this. Same for me, but I did not grow up with this as an annual treat. So it reverberates less for me.