THE UPSIDE DOWN GIN BOTTLE

For some reason the apartment mate and myself were discussing buildings which are recognizable, the high rises and constructions that are the signature parts of every urban landscape. Like the Notre Dame cathedral, the well known monuments of Washington which have been turned into a set of lovely and detailed cigar humidors, stuff in London, and Amsterdam Central Station, the Rijksmuseum, and the Stedelijk.

Or, in San Francisco, the piramid and the old Folgers building on the waterfront.

So I mentioned the Upside Down Gin Bottle.
Prince of Wales Barracks.
In Hong Kong. 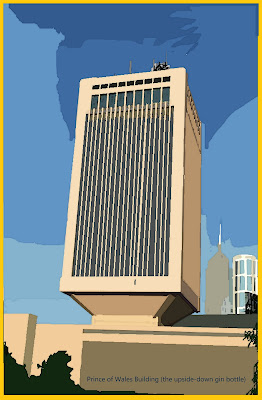 When Adrian was still in Hong Kong, he would smoke outside the highrise where his company was located, NOT outside what is now the People's Army Headquarters, but he could probably see it from there. Or, in any case, he knew of it, and would instantly recognize it.
As would everyone else; it's distinctive.


The proper pipe tobacco to smoke while observing this building, or enjoying a lazy break outside one of the imposing structures in Central, would, quite naturally, be Dunhill's Elizabethan Mixture. As Adrian did when away from his office.

What I smoked tonight while waiting for the bookseller at the usual spot in Chinatown was Greg Pease's Embarcadero. Mostly red Virginia, goodly wallop of Smyrna, in a loose broken flake form that scarce needs any rubbing out. Which is very nice. Deep.

Goes very well with hot milk tea, and Cantonese food.
Not refined cuisine, but working class goodness.
Had some after pastries and a cuppa earlier.


It has been a three-pipe day.
Very pleasant.