Europe discovered caffeine five centuries ago, which spurred the greatest psychosis in history. Colonialism and conquest, the industrial age, mass literacy and education, modern science and medicine, both world wars, and, inevitably, rock and roll. About that last subject the far less said the better. I discovered caffeine when I was twelve or thirteen (I was already familiar with highly refined white sugar; nicotine came later), which let me stay up past nine, graduate from high school, and lubricate my social life.

The Western World could not have done all those things if they had still been fuelling the day with diluted beer or wine, as they would have been quite insensate by the afternoon, like they were during the Dark Ages.

One of the great advantages of caffeinated beverages was boiling (thus disinfecting) the water.
So in addition to wiring the average European to the gills, there was a better chance of survival into a ripe old age, which at that time would have been his or her mid-forties.
The world has never been the same.

Johnson wrote his famous dictionary hepped on twenty cups of tea a day.

Freud would never have come up with psychoanalyses without the coffeeshops of Vienna, and wouldn't have said anything of note about cigars.

And instead of making illustrations on my computer, I would probably be painting timorous Virgin Marys for the local monastery somewhere in Brabant or Flanders, while scratching at fleas and lice. Altenating between belching, and falling asleep at the easel. 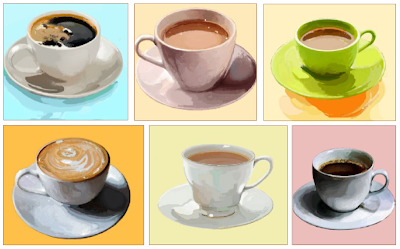 We are all probably a lot better off without me painting the Virgin Mary.

Contrary to what many of us think, we do much of our best thinking after coffee or tea, not when we're drunk or stoned.


How sad that modern romance seems impossible without alcohol or marijuana.


My longest intimate relationship, which lasted far longer than most marriages, was with a woman who neither drank nor toked. She was perfectly happy without booze and weed.


For some reason many of my recent illustrations have been hot cups.
None have been of timorous virgins in cow stalls.
Which is remarkable.