All over the world, civilized people of all kinds enjoy a cup of tea with milk and sugar at some point during the day. That's just the way it is. Englishmen, the Irish, Scots, Welsh, Indians most especially Parsees, Hong Kong working people, and several educated Dutch Americans (*) in San Francisco or Boston. It's calming, comforting, and reviving. Gives you the energy to hod that bale, go up the rickety bamboo scaffolding, or salt down the herring in the barrels.
So you can understand why I'm baffled almost no Americans do likewise.
Not all or even most of them, naturally.
But more of them. 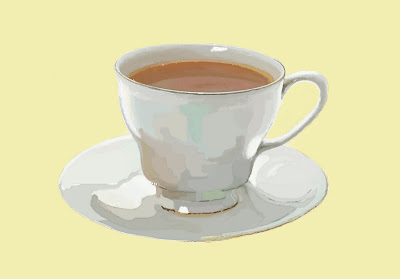 Most Americans swill bad coffee or sugary carbonated beverages for "energy". And I must admit that in the morning I will have one or two cups of coffee to kickstart the day, especially because it spurs peristalsis at some point -- a process I have found beneficial -- but the day does not continue without a nice cup of tea.

Americans, quite peculiarly, seem unable to grasp "tea". If you order it at restaurants, you will be offered a cup of barely warm water and a selection of herbal teabags, almost always including chamomile, Red Zinger, and something with dried fruit or citrus peels.

All of which, quite frankly, is f*7king barbaric.

By the way, that jar of non-dairy "creamer" powder in the office kitchen is mostly palm wax and chemical stabilizers, unsuitable for any beverage. You wouldn't put it on your cereal, would you? Why do you think it goes in coffee or tea?

Today's plan involves another cup of coffee (post walk peristalsis!), ablutions, followed by a pipe, a good read through the news of disasters, political scandals, Republican treachery, the increase in disease, and a cup of tea. And another one before I decide to go to my bank, have lunch in Chinatown (which will include tea), another smoke, then home for some more tea.

The rest of the country will go to Starbucks to get something with syrup and soy-milk, extra sugar or sprinkles, while breathing on each other and spreading disease, several times during that period, then wonder why they need an entire aisle of medicines for their stomach, lower intestines, acid reflux, and gallbladder malfunctions at Walgreens.
It's one over from the get-well-soon cards.

(*) Educated Dutch Americans: two people. One in each city.

My habit now is to start the day with coffee, and have tea for elevenses and later for, well, tea.

But as a young man in the UK I drank tea at all hours as coffee then was a rarity.

Americans do not know how to prepare or drink tea. The poor dears.