In reaction to the British influencer who now identifies as Korean, despite being so white that he glows in the dark and you can read the Necronomicon by the unearthly glow from his pallid Caucasian dermis, I shall henceforth on occasion identify as something else too: a vampire unicorn covered in sparkles. I feel that as an uninfluencer it's the least I can do.

I feel his ridiculous pain.

I also have a prefered set of pronouns, but they're all horribly insulting to other people. You may refer to me as "his majesty". As in "does his majesty wish to wip the peasants?" "Why yes, his majesty indeed wishes to do that; knave, bring me a bundle of sticks for that purpose!"

His majesty is contemplating lunch.
Among other meals.

At some point this week I intend to have some soul food. Cantonese American soul food, as performed by a Dutch American living in San Francisco who knows that his doctor and the nutritionist at the hospital would disapprove, while probably being rather jealous, seeing as they are, in fact, Chinese Americans, and what I propose to eat is bad for the system, because of a whole number of factors. But very delicious. It's the Cantonese equivalent of a hamburger. 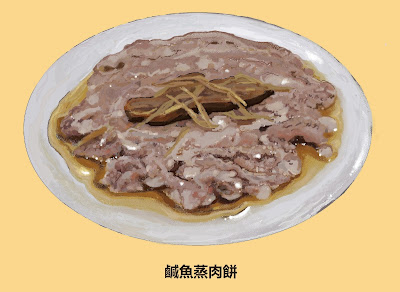 Steamed pork patty with salt fish and ginger shreds. Easy to make: take a quantity of ground pork sufficient for one Dutch American and smoosh it onto an oiled plate. Dump a wedge or a few slices of salt fish on top, add ginger shreds, and stick it in the steamer for ten minutes. Drizzle it very lightly with soy sauce, and eat it with rice. And sambal (Dutch American soul food; it makes living among the Anglos and their wussy food preferences do-able).

If you are frightfully Anglo, you may wish to eat it with ketchup and ranch dressing, and in lieu of rice some spongy tasteles bread (a hamburger bun), with limp fries on the side). Come to think of it, you might recoil screaming because in your mind it doesn't look edible, or even like Chinese food, because it's not in forkable chunks covered in glistening gloop composed of soy sauce, red food colouring, lots of sugar or treacle, and a little vinegar, like everything you've ever had at Fishbowl Wok or General Chou's.

I drew it, because a dear friend remarked about a previous illustration "Looks like Kermit the Frog melted into a puddle of yuck".

Which was very likely because she doesn't like bitter melon, and maintains a file called "how can people even eat that?". With mostly white people things, but she doesn't discriminate; all cuisines are probably in there. Including her own. The very first item is undhiyu.

Her reaction to the picture of the pork patty will probably be "no wonder no one wants to eat with you". But she'd approve of the sambal (hot chili paste with other stuffs mixed in).
By the way: Sriracha is a vegetable.