The intent to gasak Portuguese chicken rice was stymied by the fact the place I to go to was closed for Independence Day. So I went around the corner and had a late lunch at a place in Waverly where I know the people. It was the first time in sixteen months I had been inside. It's changed a bit, but the sme folks are still running it, which is good. Ended up having fish and bitter melon over rice (涼瓜班飯 'leung gwaa pan kau faan'), which is flavoured with salted black beans (豆豉 'dau si') plus garlic, ginger, and scallion.
Very good. As was the milk tea. 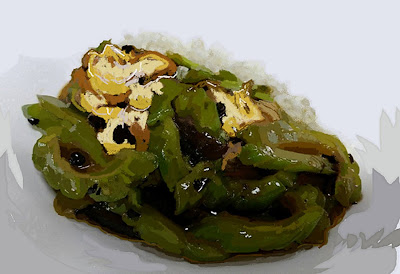 Business is scant. But they are surviving. Grit, stubborn determination, and a customer base in Chinatown which very evidently gets lots of food to go. I am glad to see that they are keeping their heads above water.

Afterwards I ran into Tat Yee on the street, and a block later the sifu from the opera club. Plus 'Baldy', who used to cook for the Pacific before it closed several years ago. Familiar faces, also still maintaining. Life had not been very easy for anybody this past year, and there are a number of people whom I hope also survived, but have not bumped into yet.
It will take a while before I know.

[The neighborhood was surprisingly busy. Lots of tourists. Many of whom seemed from places where masking may be unknown. Which, judging by other people in town, presages rates of infection going up after the weekend.]

All day long there had been rumbles and explosions. By evening it got worse, but with the fog rolling in the idea of watching the fireworks was ridiculous. So in that sense, things are returning to normal.


It seems like there were more skeevy slope-brows floating around. Perhaps I've become more judgmental over the last year; my opinion of the maskless is not very good. Or maybe the less intelligent have been more quick to ditch the cloth at the first opportunity.
Some of us are still exercising caution.

I myself tend to smoke on less travelled streets, and step around clusters in wide arc, or leave the sidewalk to let them pass. Almost like they were mediaeval plague carriers, or syphilitic sailors. Carelessness and complacency don't sit well with me.

The entire weekend the boys living opposite have had crowded parties in their apartment. Social distancing would've been impossible. Seemingly, sensibler behaviour was too. 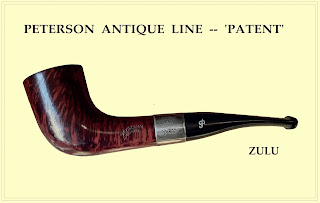 Smoking a pipe is not a social act. Even in public. There are, fortunately, enough people for whom the reek of tobacco is too repulsive to come near. If that weren't enough, my glowering deepset eyes underneath bushy eyebrows scare them away, and a stout walking stick further keeps the incautious and irresponsible types at a distance.

I have become more unlikeable in the last year.
So have many other people.