An expression I've heard the turkey vulture utilize, when he's being voiced by my apartment mate, and which may date from the years when she was an innocent little Chinese girl growing up near Washington square and which might reflect the realities of childhood in San Francisco which I wouldn't know because I was never a child here and tend to avoid most people of that age even though I generally speaking appreciate their existence if not necessarily their noise because they often say startling things, loudly, and haven't learned to modulate or frame their thoughts precisely like the senile old coot with whom I sometimes have to associate in Marin County (he believes in space aliens and thinks masks and vaccines are all a big plot by the gubmint, and he can't spell worth diddly), is: pyeck them in the naugahydes. 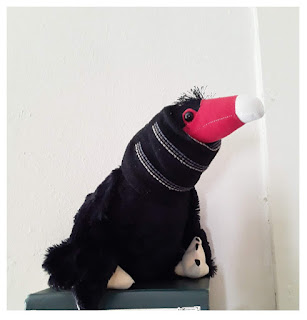 Sydney Fylbert (the turkey vulture) is often so pissed at me for calling him Dumpty-wumps and disputing that he's malnourished because he hasn't had any corpse to eat recently that he threatens to do that to me.

People who pee in the pool should be pyecked in the naugahydes. So should litterbugs. Along with anti-vaxxers, and all those idiot Caucasian tourists wandering around the city and entering places of business.

Such as the hordes of honkies who decided "hey, let's all crowd into this narrow area in front of the pastry cases and ask really stupid questions" at the place where I was enjoying a baked item and a hot beverage yesterday. Sometimes I really hate my fellow white people. And I was trying to get away from them, because if they're wandering around Chinatown in groups they're probably dummies from the interior (anywhere between the Oakland Hills and Perth Amboy) spreading all kinds of diseases, and wrinkling their noses at things we do here in San Francisco. Or suburbanites. Honestly.


The Covid pandemic ain't over, folks. Not by a long shot. Wear your damned masks.
And now is not the time to tourist your asses all over the damn place.

Many of you-all need to be pyecked in the naugahydes.

No, I do not know what "pyecking" is, I suspect it's San Francisco Toishanese children's usage, and I am afraid to seek confirmation. Kick, tromp, strike, clubbed with a baseball bat, whatever. And naugahydes are pretty much self-explanatorily euphemistic for body parts particular to one or both genders, shan't inquire either. Everyone's got 'em.