An advert playing on a corner pop-up screen whenever I visit a certain news site finally caught my eye. Colourful, stylish and stylized, pretty pretty, with lovely soaring land and cloudscapes. Repetitive. Finally, after noting it several times, I researched it on the internet. It's a multiplayer game in a fantasy universe with interestingly dressed girlies, very Japonesque.
Curvaceous pale gams.

Probably not going to investigate it any further. It grossed several hundred million. Developed in China. Now on even more platforms.

Mind you, I like gams. Gams can be nice. But I'm not into video games.


The last time I played a multiplayer video game was back in the stone age, when I joined the engineering department to repeatedly shoot the Human Resources clown every evening at the computer company on a Beta version of something. He never figured out that we had rigged his machine to always reincarnate him in the bright yellow spacesuit comfortably in target range, with his back toward the heavy artillery.

It was fun shooting George. He remained clueless. 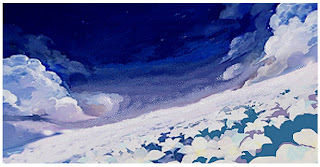 Remarkably, the girlies in this advertised video game do NOT appear to be suffering from the cold in some of the imaginary sceneries. In real life, of course, they'd be slicing open their Tauntauns so they could stay warm inside the corpses, enjoying fading heat.

The art is nice, but strictly bonbon box tittilation. Yet innocent.

So I highly recommend it for teenage boys.

They'll find themselves in it.

What this world needs is a video game featuring grumpy forest creatures with teeth struggling to get their boat river or swamp worthy, while chasing away bunny rabbits who want to steal the last tin of McClelland forty year anniversary aged Virginia pipe tobacco. Where the hell are the matches and the tamper? They MUST be in these baggy tweeds somewhere! A quest for pipe cleaners. And perhaps the store has some nice slices, an old tin of Capstan.
Or maybe even Dunhill's Flake from the seventies!
A cup of hot tea would be nice right now.
And a plate of buttered toast.

Many possible scenarios and story lines set in grimly beautiful landscapes. It just needs to be developed. Figure out how to get the curvaceous gams in there and you've got a winner.