Within the first few minutes of being on the internet this morning, I became exposed to Chinese bronzes, and a cat-loving ironworker with tattoos. Both were the results of my pipe smoking. The pictures of Shang and Zhou bronzes were courtesy of a pipe carver of extraordinary abilities in Mainland China, the cat-loving tattooed ironworker is a pipe smoker who appears to be retired, fellow-member of a forum whose average age is approximately me.

Yes of course I scoped out the profile of the ironworker. He commented underneath one of my posts, and one must always have a clear idea of people with whom one gets conversational. Just in case they're skeevie Qanonites or rightwing hosebags.
Which he fortunately appears not to be.

The briar artist in China is a known quantity. Like many such people, he has literary sensibilities and perspective. It's a small coterie, most of whom are, as you would expect, cultured people. In China, pipe artists are rather like seal carvers, a subset of the literati class, with broad interests, trained eyes and minds, finely honed tastes, and relatively sober judgment.
The field does not appeal to pigs. 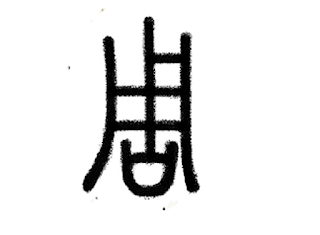 Zhou glyph
Of course fifty years ago they would have been sent down to the farm to slop the pigs and shovel sh*t, and their tools and work destroyed.

Years ago I used to carve seals. Learning the ancient script was fascinating, as well as figuring out how to fit the characters within the confines of the space at the end of a small stone block. Sometimes a soft spot in the surface had to be dealt with, designed around, and the tension of arcs and curves had to be kept in mind. I seldom carve nowadays, but I still keenly examine examples of seal script calligraphy (篆書).

I have just an extremely minor facility with the form.
And my blades are used for other things.
But the eye is still active.