It's a simple dish, with a taste that little children might find startling and repulsive. So it was altogether a good thing that of the dozen people in the restaurant not a single one was a child, and other than the waitress, none of us were less than middle aged at best. Two of us, in fact, were feeling the mental wear of our years. We kept an ear cocked for one, because she spoke softly and occasionally mumbled to herself, and an eye on the other, because his motions and periodic twitching were disturbing, and he tended to move around the room.

Bitter melon omelette (涼瓜煎蛋 'leung gwaa jin daan' ) is a dish for mature people. And even then. The texture and herbal bitterness of the vegetable have always appealed to me.
And with sploodges of hot sauce, it is very heaven. 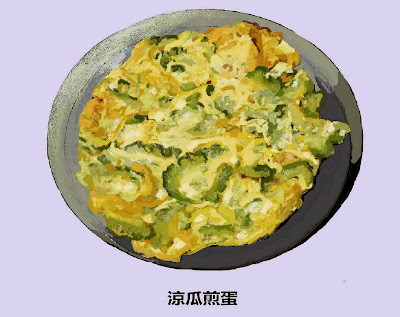 I have no idea what the two middle-aged white people two tables over were eating, but they were quietly enjoying themselves, and did not require any attention. Which is good. They had probably made reasonable and well-balanced choices; they looked the type.

Halfway through my meal the waitress had had enough of the sappy Mandarin ballads on screen, and changed to modern era Canto pop, in which the lyrics were more zippy, and the voice-artists were putting on a show. First act: triceratops heads, furry costumes, prancing. On a huge stage surrounded by thousands of worshipful fans. second act: goth squared.

I should have paid more attention, I have no idea what they were singing about.
Probably post-1997 angst and anomie. A pit of the stomach feeling.
Childhood traumas and totally rad haircuts.


Maybe they were lamenting being forced to eat bitter melon as children?
Much like a lot of American songs are actually about broccoli.


You know, modern music would be a lot more intelligible if, like with Cantopop and sappy Mandarin moaning, they put the lyrics on screen so that you could sing along.

I'd much rather eat bitter melon than listen to Curt Cobain.
Or anything by Kanye West or Justin Bieber.
Or dammit Nickelback.