THE STENCH OF PINEAPPLE AND MANGO

For some reason I dreamed of the last two gentlemen who smoked Erinmore Flake in Marin County. With whom I got along rather well, despite my known distaste for that product, which, as you know, is a notorious tobacco known for making strong men quake and youngsters flee into the hills, screaming for their mommies. It's got a reputation. Quite undeserved, because underneath that cloying candy funk (pineapple, soap, tropical fruit, and licorice) it is actually a decent product. Solid medium Virginias, a little Burley and firecured leaf.

If smoked slow and on the cusp of going out, the queer fragrance soon burns off, and it will perform well all the way to the bottom, leaving a fine ash. Which, of course, is not how most people smoke.
Smoked fast, it ghosts the pipe.

My first experience with it was when I was a teenager. Suffice to say it left me furious, because I had spent my allowance on the tin, and had no more money for tobacco till the following week. And here I had a supply of pipe stuff that had made me vomit twice!

It was several years before I decided to try it again. I am a glutton for punishment.

Young men tend to smoke hot and fast. Which, of course, is why mature individuals are more appealing to many people.

Both Thomas and Ib were older men, both passed over a year ago, and both preferred flakes with a marked Virginia quotient, sometimes Navy, sliced coin, and Luxury Twist. Their favourite being Erinmore Flake.
To the best of my knowledge it had never made them heave.
Mentioned as a detail; nothing implied. 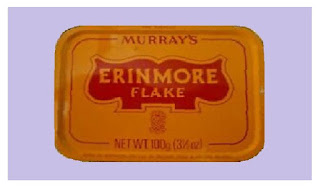 Thomas spent his last several years gardening, which gave him much pleasure. He would fondly talk of Hong Kong whenever we met; he had been born there and while still a boy was interned at Stanley. Like many people of Dutch or English background out East, the home country's climate gave him the willies once "repatriated".
California beckoned.

I never did know much about Ib's backstory. A taciturn and very likable Scandinavian, just happily smoking stinky tobacco in his old age, probably wandering around in the vicinity of his retirement home.
In Marin, smoking brings the angry puritans out of the bushes (unless it's marijuana, which is considered "medicine") to scowl and say nasty things.
I expect he walked a lot, and may have rediscovered nature.

Both men stopped buying Erinmore Flake during the same summer. We didn't see them for a while, and only found out later they had left this world for the next. A place with a nice climate, no poison ivy, and well-cared for rose bushes. They might be the only Marinites there.

Pot-shaped pipes, as pictured above, are called that because of the shape. There is no connection with Marin County's only cash-crop. For some reason I always associate them with Erinmore Flake. Possibly because of the simplicity and solidity, which suggests mature men tromping around a blasted heath in inclement weather. Wearing mildewed tweeds and baggy sweaters, or thick corduroy pants.


Unless you slow down to smell the butterflies, little grasshopper, you will never see the elderly gentlemen hiding in the gorse.


Had my first bowl of tobacco before eight this morning. It wasn't Erinmore (though there's a years' worth stashed in a bookshelf), and the pipe was a billiard shape by Comoy. There was still fog, and it was a bit cold. Very few joggers, a few dog walkers, and the young fellow who lives further up the street smoking a cigarette outside his building. Quiet, peaceful, and reminiscent of gloomy summer weather in Devonshire, Cornwall, Amsterdam, Antwerp, or Dublin.

If this were Northern Europe, it would rain.
Which I miss a little.