I AM NOT A NAKED MAN

A friend in Maine mentions that it's over eighty degrees where he lives, but actually quite pleasant. Which brings up the question whether we like summer weather because of the heat, or because we associate it since childhood with no school. The first rather suggests that going outside naked is enjoyable. Which any one who is an urban nudist knows is not the case.

People who, in their dreams, were frequently naked except for a sweater which wasn't nearly long enough while the parishioners left the church across the street after Sunday mass also knows for a fact that being bare on the public street is not enjoyable.


This blogger does not like hot weather, which anything over seventy is. At present, in San Francisco, it is fifty eight degrees, the sunlight is wan and faint. My neighbor from a few doors down left the building in clothes that betray what a painfully scrawny old fellow he is, no body fat to spare. His metabolism is different.
I do not have any garments that would do that; my wardrobe tends toward comfortable and slightly loose at least. These pants could be a bit narrower, and the shirts could be more form fitting while still being airy.
And this is sweater weather in any case.

The civilized man needs pockets. Keys, wallet, matches, and a folded-up tissue for the specs. Frequently also notebook, pen, coins, tamper and pipe cleaners. Plus a pocket to stash receipts and lottery tickets.

Bus fare. Although if one is naked, it is not very likely one would go downtown. Or be allowed on the bus without a mask these days.
Besides, it's cold and windy there.

So you will understand why I have always thought that yoga pants and leotards are absolutely ridiculous. 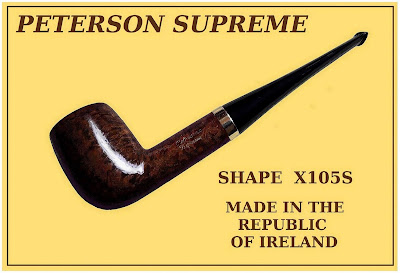 On average I have ten pockets. I can easily stash all of the items listed above, plus tobacco, a briar pipe or two, and an ear-twiddly for when my canals itch. Which is very important. A clean ear is a happy ear.

The next walk and puff will involve a dashed handsome looking gold-banded Peterson Supreme billiard shape X105s purchased long ago from Drucquers, in which for many years I smoked full Latakia blends. Didn't use it for several years after having it re-stemmed (which it didn't need), because I had grown tired of saddle stems and wanted a taper. What came back from the stem-guy whom I shall not name (damn him) was not what was wanted. And I had included a clearly printed sheet asking him to not buff or clean the six pipes I sent out, but he was, sadly, illiterate, incapable of reading as well as un-neurotic about details and slow.

In person, I severely disrecommend him to everyone who asks.
But you will never see his name mentioned here.

Not long ago I used a spare blank at home to carve a new stem myself.
Did a better job of it than that fool. Fairly pleased with the result.

There will be tea after smoking.