IT'S NOT ALL ABOUT FISH

Over the weekend and into today, food has been a frequent subject of discussion. Is it time for a burrito? Do you also put Sriracha on your snackcrackers? Plus Indonesian food (see this recent food post and this older essay), Parsee cookery (a picture of a pickle inside pink cotton candy), and herring.

Groene haring (green herring): Fresh caught herring, gutted but with the pancreas left in, lightly salted (and per current Dutch laws frozen for one to two days to kill any possible nematodes), then thawed and served in it's uncooked state. The pancreatic enzymes tenderize it and make it easier to digest. As such, the high fat content of the first year herring (a little virgin, in Dutch a "maatje") makes it yummy. American tourists often look at it with extreme distrust, and ask if there are any bacon cheeseburgers nearby.

Note that by Japanese standards, it's too "cured" for sashimi, and also far too fatty.

Willem Beukelszoon invented it in the thirteen hundreds. Because of that development, the fleet could stay at see for weeks, instead of having to return to port every evening. Which meant that ship building technology improved, boats got larger and deeper, and were eventually used for long distance trade and waging war against commercial rivals. This would lead, inevitably, to the best navy at the time, the successful attack on the Spanish silver fleet off Cuba (Admiral Piet Hein), and the sinking of the English fleet deep upriver by Admiral Michiel De Ruyter (the raid on the Medway). Oh, plus kicking the Portuguese out of Formosa, and various other far eastern adventures.Or, to put it differently, it made us the best assholes we could possibly ever be. It's the fundament of our nearly successful attempts to destroy the English, French, Spanish, and those hosebags in Scandinavia. The less said about "Surströmming", the better.
It's a mental health issue.

Plus a brief conversation with a Karen to clarify that there is no marijuana in a pot-sticker, and that isn't false advertising. 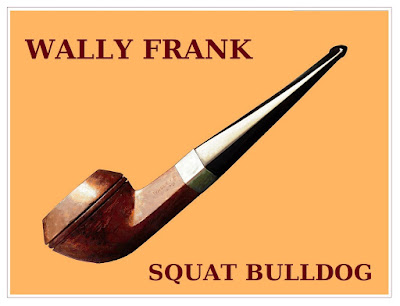 All of this serves as a preamble to lunch, that being pot-stickers, grilled sausage, mustard greens (sambal goreng daun sawi), and a cookie (as the starch). I picked up the pot-stickers in Chinatown after visiting the hospital pharmacy for my refills.

I would have smoked a pipe there, but it was too windy.
The pipe pictured above was in my coat pocket.
I'll load it up for after enjoying tea.

Wally Frank was a tobacconist with a mail-order business ages before the internet. The pictured pipe was probably acquired that way. Squat bulldogs are a shape I like, so when I found it being offered for sale as a second-hand item, I picked it up to examine it, and, as one does, twisted the stem to remove it. And so breaking it. There was a small tag attached, which said specifically not to do that. The previous occupant had glued the stem in place. And because he or she had never used pipecleaners, it was also blocked beyond the tenon. So I bought it, took it home, carved a new stem, cleaned up the mucky draft hole and reamed the gunk out of the bowl, then sent it off for a band to strengthen the shank where there was a crack.
That was nearly ten years ago.
It's a decent smoke.

The burrito was specifically lunch two days ago. Carnitas, no beans, extra cheese and extra salsa picante. From which I had a little acid indigestion afterwards (and frequent heartburn is a side effect of one of my medications anyway), which will by no means stop me having another big fat burrito exactly like it soon.

The dill pickle on a stick covered in cotton candy is peripheral to Parsee cooking, and was mentioned by a Parsee. It is NOT Parsee food. Parsees are keen gourmands, as anyone who has read the lovely food columns by Behram Contractor ("Busybee") will know. And while there is an actual parsee cuisine, they'll happily explore other foods and the specialties of the people with whom they come in contact.
Often adding their own twists.

Break jaggery apart, put in an enamel saucepan with water, the cardamom, and the cloves. Plus the onion, if you wish.
Cook till the jaggery dissolves.

Peel, cut, and de-seed the mangoes. Note that very nicely green mangoes will have a tender seed and the flesh will not have become all fibrous around it. Nor will juice and pulp cascade over your hands at this stage of unripeness, and the flesh is firm and fragrant, pleasingly tart.

Add the sliced mango to the jaggery water, and simmer till the mango has softened and the liquid has become stroppy.
Serve alongside dhansak.


I doubt that any Parsees in their right minds would eat a cotton-candified dill pickle, though. That's the kind of thing that only waddilly poddilly Texan fattaboolas might consume.

Snack crackers are infinitely improved by the addition of sambal.
Just try it, and you'll agree with me.