THE WAY THINGS ARE

Next week I see my doctor, as part of the follow-up from my treatment a year ago. And I expect he will ask me the usual questions, one of which is "Mr. Atboth, are you still smoking?" Well darn it, yes, of course I'm still smoking; my pipes and fine tobacco keep me sane. He will of course reprimand me, but at this point there are far greater dangers than enjoying a pipe three or four times a day. Do I need to mention one of them?

And, in fact, smoking on the streets of San Francisco ensures social distancing. The reek from the tobacco being burned guarantees that no women, children, vegetarians, and purists come anywhere near me.
Fastidious San Franciscans will avoid me like the plague.
Which is good. Perfect. Kindly keep doing that.
You are all potential vectors.

On the other hand, I'm walking more. Good for circulation, digestion, general mood, and a right leg that's been a pain in the nether regions for years.
Not being particularly social, these are the best of times.

Went through the pipe collection and added a few more to the rotation. Every walk means a smoke, and in the hours between walks, there may be toast with marmalade, a hot beverage, and a book.

One of the pipes back in circulation is one of the first pipes I restored.
A long Canadian, made by Comoy for Sutliff, probably mid to late thirties. Sutliff eventually became Grant's Pipe Shop when the original family left the retail trade and concentrated on manufacturing, being responsible for some good tobacco, as well as some pretty damned ghastly crap that was popular back in the day. Manager Ed Grant bought the shop.

Comoys made pipes for a large number of tobacconists.
But the shapes were recognizably theirs.

No, I cannot remember where I picked up that Corinthian. Despite it's age, and a few minor fills, it's a darn good smoke. The fills are barely larger than pinheads, and have turned quite grey. But they are scarcely visible. I worked on it in the mid-nineties, when the decrepit table in the kitchen was still in use as my workbench, before I repurposed it as a computer table, and a few years later got rid of it. The rim of the pipe was the most trouble, as the previous "occupant" had been very casual. Re-topped, re-bevelled.
Original stem.
It smokes very nicely, as the casual man had had decent smoking habits, and avoided fruity garbage. Meaning, almost certainly, that though he purchased a Sutliff stamped pipe, he avoided Sutliff tobacco.

And yes, I do associate this pipe with tea, and hot toast with melted butter and chunky orange marmalade. It's a comfortingly cozy pipe, with that delicious ancient briar that used to be somewhat more common. Like the other Corinthian which I mentioned a few months ago, there is a warm translucence to the lighter parts of the grain. 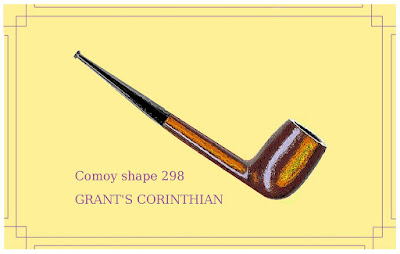 Sings with VaPers. And I remember it also performed superlatively with Balkan blends, such as I smoked habitually in the past.