About four years ago Tib (Tiberio) asked me to clean up his pipes. He had barely smoked them since college, but evenso, the crust of decades adhered. Oxidized stems, gunk in the shank, and the carbon layers were too thick. Among them were eight Comoy Blue Ribands and a lovely Sasieni.
So I did. They were as good new when he got them back.
He gave me one of his other pipes as a thank you.

Once I "re-engineered" the draw, that pipe proved to be a wonderful smoke. As well as a memento of the man, because Tib died two years ago.

Recently I started smoking that pipe again. It's been in the rotation off and on, sometimes it returns to the storage drawer (three document boxes filled with pipes) for a month or two, but it's a darn good smoke. 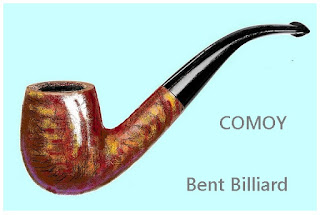 Being a rather grim practical sort of person, with somewhat Spartan tastes, my preference in briars veers toward straight pipes. Clean, unpretentious, elegant, and easy to set down. Other than Peterson System Standards, which look more pipe-ish and like serious smoking equipment, I tend to eschew bents. Though some can be quite nice.
This one is.


Tib was boisterous. A very warm-hearted person.
Once you met him, you'd remember him.

A year after he moved to Southern California, he passed away. His son told me that his doctor demanded that he quit smoking in the last few months. Which, all things considered, wouldn't have done a damned bit of good.

He was nearly eighty years old when he died.
A good man.