All of the chachanteng in Chinatown are closed for the nonce, of course, and it is unlikely that once this is over they will re-open. Same goes for the bakeries in that neighborhood. It may take several years before such places can thrive again. More than the snacky things, I am concerned with the people who work there. They are some of my favourite people, and I worry about them. In the grand scheme of things, this is not important. But on a micro level, their impoverishment and hardship are a disaster, and I doubt the neighborhood will easily recover.
I miss those people.

So, lunch today was home-made "pastry noodles" (粿條) with charsiu pork. Pastry noodles, kwee tiau in Hokkien and Teochew pronunciation, are thick rice stick noodles with a high glutinous rice or corn starch content. About half in inch broad. When they are pan-fried, the surface ends up with almost a lacy scorch-toast patterning, and if one were Hokkien one would prefer this with oysters and shrimp as the added protein. Being a Dutchman, and fresh seafood items on short notice difficult nowadays, the left over charsiu pork from last week, plus scallions, ginger, soy sauce, chilipaste, and a squeeze of lime seemed easier. Washed down with strong milk-tea.

Followed by the inevitable pipe full, and a walk. 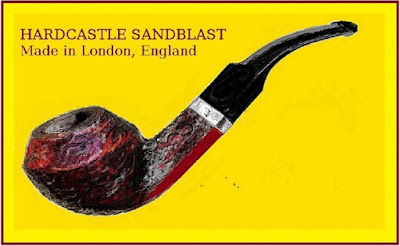 I would have preferred to enjoy the pipe WITH the milk-tea. But the Chinese element in this household was home and at her computer. She is 'fastidious' in some regards, despite living in the same apartment as a grungy Dutch American smoker. Meaning that now that her employers have finally put their collective foot down, all staff will work from home goldarnit.
I won't be able to smoke inside at all.
For several months.

My taking three or four walks every day benefits her sanity.
And gives me time to day dream.

Earlier I had smoked a bowl of Rattray's Professional Mixture. An excellent product, but not entirely satisfying, given that flakes and Virginia-Perique blends suit me better. Still, enjoyable. Probably will have offended any number of people.

The pipe in the illustration is a rather pedestrain item which I've had for a decade and a half. It turned out to be a surprisingly good smoke, despite being almost a cliché piece.

Drilled so that a pipe cleaner does actually easily reach the bowl.