The auntie with the pistachio-hued hat or bonnet was out there again, walking up and down the block for her morning constitutional while I smoked my cigar. No, I didn't wish her good morning, what with being on the other side of the street and in my bathrobe. Most little old Cantonese ladies don't recognize strange men in bathrobes with cigars. Strange men in bathrobes with cigars are not common in the Cantonese environment.
Particularly when they're Caucasian.

No, I do not know why that is.


The other day I was out of the house for my first pipe smoke of the day when she started her walkies. The correct way to say good morning in Cantonese is 早晨 ('jou san'), which sounds like 'Joe sun' with a slight questioning twist at the end because of the tone. It sounds better when you're properly dressed.

And Cantonese ladies of any age often hate cigars. Pipes, however, have gravitas. Besides being by themselves elegant, and demonstrative of good taste. Oh, and they're more enjoyable too. Which an elderly non-smoker wouldn't realize, but in all honesty cheroots pong a bit, and suggest nothing so much as corrupt bankers or shipping tycoons, whereas a briar pipe hints at scholarly tastes and bookish habits, which in the Canto world are jolly good things. 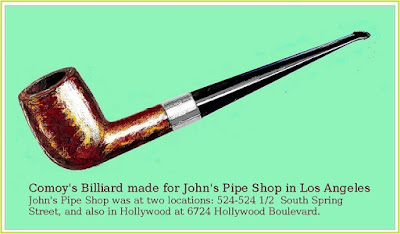 Yeah, I was probably perverse as all git out when I first started smoking a pipe as a juvenile, but I enjoyed it so much that I've continued since then.
My dad started when he was in his late teens, took his pipes with him when he was in the Royal Canadian Airforce during the war, and smoked a pipe when he was went to sea, at Northrop Engineering, and at Philips.
He was a calm man of temperate tastes and bookish habits.

Though the pipe above dates from the pre-war period, it is not one of his old pipes. But I acquired it because.

First pipe of the day. Aged Virginia with a hint of Perique.
An old-fashioned smoke. Evocative.
Delightful.