The apartment mate was up well before me, stumbling about making coffee. She was planning to work from home today, so I knew I would have to stay out of the television room most of the time. Seeing as that's where all the computers are. But a connectivity problem with the work server nixed that (and she hates working from home), which meant that shortly after I had my first smoke of the day all bleary eyed and in my bathrobe on the front steps she beetled out and down to the office.

As I may have previously mentioned, with only the IT department there and everything thoroughly sterilized, it's not a hazard.

That left me a nearly full pot of coffee.
Babies, I'm wired to the eyebrows! 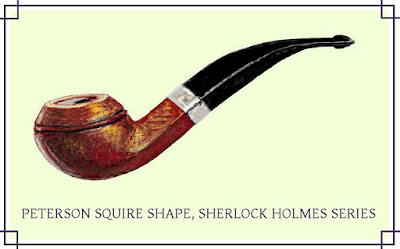 First pipe today was the bent bulldog Peterson from years ago. Second pipe, several hours later, was the no-name pot mentioned here at the beginning of this week. Damned fine smoke. Third was an old sandblast taper-stemmed apple .

There are too many people on Polk Street to really enjoy the walk, so the fourth time I go out I'm bringing a cudgel. Human beings, as everybody knows, are infectious, diseased, unclean, and generally inedible. 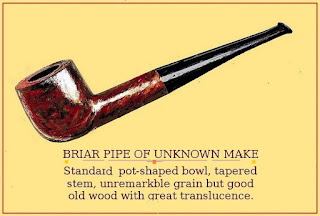 A reasonably man would have thought that a pipe filled with tobacco might keep other people away from one on the sidewalk in San Francisco.
Apparently not. The bastards seem to think it's their pavement.

A mask, as is required, when slung under the beard, makes one's silhouette look double-chinned in plate glass shop windows. Not a flattering look. But you cannot puff your briar with the damned thing over your mouth, so just in case anybody asks I'll tell them not to French kiss me.

Still enjoying my own mixture of Virginias with minor condimentals.
My tongue tastes like smoke, ladies.
It's second hand nicotine.