IT SUITS ME TOO

Back when I worked at a no longer extant law office that I can only mention with distaste -- because it was a horrible place where many of the other staff members had broomsticks up their rears -- the week often ended with a pipe smoke at Sherlock's Haven, a lovely tobacco store nearby, run by the affable Marty Pulvers. A knowledgeable man, who had no pretension of being an expert blender, and labelled his house blends exactly what the manufacturer called them. If the jar said "Dunhill Early Morning Pipe", that's what was in it. Same with some Gawith & Hoggarth mixtures, as well as tobacco from Esoterica.

Marty's attitude was why pretend, and furthermore, why reinvent the wheel. Some stuff commercially available was stellar, and he wanted you to be able to enjoy it, especially if you moved out of the area.

Given how many stuck-up snooty dickwads worked in the Embarcadero Center offices, his shop was a sanctuary, where a man would be judged on his character and his intelligence, rather than his suit and fancy shoes. 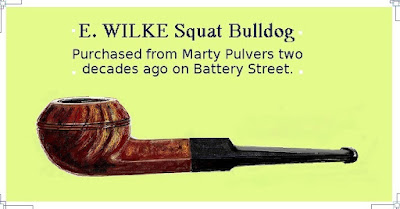 
Many of the Friday afternoon regulars were all-right guys, people whose company remained an enjoyable part of life in the years since Marty retired, who would companionably gather at a spot near Sansome and Bush on a daily basis for cigars or pipes. Good men. Senses of humour.


Marty happily catered to my affection for Comoy pipes under different names. At one point nearly every pipe store in California had briars with their own name stamped on them, but recognizably Comoy's manufacture.

E. Wilke in New York, however, made their own pipes.

Of which I only own one.