When street people need money, irrespective of whether you have any to spare or not, you should invest the exchange with a certain amount of dignity and decorum. "Good evening, here you are, be well." Or "so sorry, I'm quite strapped". Because I tend to give out the odd dollar bill here and there, I tend to wander around the neighborhood circuitously so as not to feel too imposed upon. Each pipe smoke means a walk. Head uphill first (good for the damned leg), then go across one or two blocks, back down a few, and over back to my own street.

There are four dysfunctional individuals I tend to encounter regularly, though not necessarily every day. So at two or three dollars per day, it's definitely affordable. Especially because I do not frequent or even patronize most bars, brothels, or Starbucks establishments.

Well, occasionally a bar. There's a bar in Chinatown where my friend the bookseller and myself would head to once a week for cocktails and bad singing (karaoke), though for over a year I've abstained because alcohol interacts badly with the medicine I'm taking. On the whole I approve of daemon rum, though not those other two.

We still go there; I have hot water instead of whiskey.


This evening's final smoke cost me nearly twenty dollars. I'll leave you in the dark as to how much of that was charitable and how much was ice-cream.
Ice-cream, of course, is an essential supply.

Especially good after a pipe. 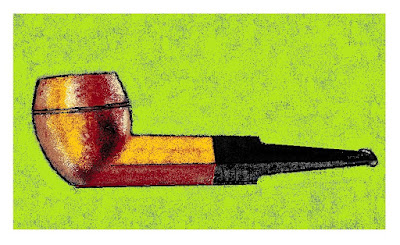 Smoked the Amphora bulldog, filled with mostly Virginias, touch of Doblone D'Oro rubbed-in. Exquisite. Didn't run into the whacked out dingo who occasionally floats through the neighborhood, or the angry drunk I will not and cannot talk to. The man who looks like a lost Taoist from the movies was in front of the Korean restaurant looking despondent. He's quiet and well-mannered, and I hope they feed him. As far as I know he doesn't smoke or drink, but other than that he's completely loopy.

The old bald black gentleman who never talks had already gotten money earlier. I see him on the intersection very often. He's been here for decades now. He reads a lot, but he's absolutely not a conversationalist, and attempting to engage him in a discussion would be traumatizing.
When I had wished him 'good morning', he smiled a bit.
That was during pipe no. 2.


I smoked four pipes today. Only ran into three street people.
Spent altogether more than eight hours reading.
So it's been a very good day.