One of the things to which I look forward, once this pandemic is over, is a steamed fish in Chinatown, or possibly pan seared yellow flower (封煎黃花魚 'fung jin wong faa yü') at an eatery that I like. If they are still around then. Cantonese, Dutch, and Flemish people, know how to cook fish. American Wasps, not so much. It would be ideal for my birthday, which is coming up in six weeks, but this year is out for any festivities. Leastways, there's not much to celebrate. 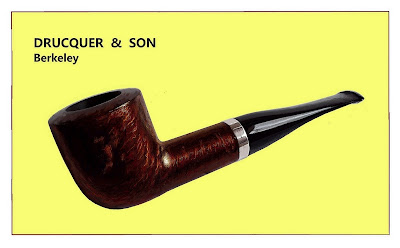 One early birthday present to myself: a pipe which is older than I am.

Acquired recently, and restored yesterday. From a place where I worked when I was in college, and which has been out of existence for years.
I like odd old things like that.

Properly cooked fish is hard to find in the United States, largely because of Wasps and their berserk fascination with tuna salad sandwiches and fish nuggets, and other things that taste like bad chicken.

I first started messing around doing pipe restoration in the backroom of Drucquers, right around the time I realized that if I wanted to eat well I'd have to cook for myself and few others, as the food in Berkeley was rather primitive then (except for the cheese), good restaurants that were not run by Cantonese people were few and expensive (Chez Panisse), and it would likely be many years before most Americans discovered coffee and chilies.
They've finally learned about coffee, in a manner of speaking, and chili paste and hot sauce are widely available at last.
Tea is still barely part of their world.


Pipe restoration is still something I often do, and I've become a rather decent cook since then. Mostly Dutch Indonesian, with strong Indian, Chinese (Cantonese), and French tendencies.

Good with mussels, bad with frites.


Everything a man can enjoy he should learn how to create himself.
Well, other than writing Vladimir Nabokov novels.
That way lies madness.

Email ThisBlogThis!Share to TwitterShare to FacebookShare to Pinterest
Labels: Drucquers