When I was younger, like many people I thought that the worst possible Republican president was Richard Milhouse Nixon. I may have been way off mark there, but Tricky Dick was what made me distrust, and rightfully, the Republicans even before I could vote. He was the kind of "leader" no country should be "blessed" with, a thoroughly despicable piece of work, and we should piss on his grave.

I may have overestimated the Republican appetite for evil.
By an enormous margin. 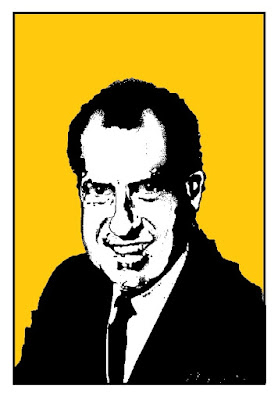 Dick Pic
The intervening years have abundantly shown that we can do worse. Much, much worse.


Even Nixon would find the current incumbent repulsive. Yet, surprisingly, there are people who will happily vote for him, NOT because he is capable, NOT because he has principles they admire, but strictly because he represents the absolute worst in human nature, and they can identify with precisely that. It speaks to them. Their fears, pettiness, greed, mean-spirited racism and hatred for everyone and everything different, and small-minded values.

They and their incumbent are a disease.
We're in the middle of a pandemic.

Many graves to piss on.