WE CARE ABOUT THE HOT TUBS!

All over Marin the lights are going out. Starting this evening, probably lasting for 24 to 48 hours. Which scarcely affects me, even though I work there. Nothing I do requires refrigeration, and I reside in San Francisco. But I feel for those people. Unless you keep the water in your hot tub above a certain temperature, things start growing in it.

The wife of one of the boys in the backroom thinks that without electricity the taps in the bathroom won't flow. So she's filled up the tub, and hopes that will last several days. She does not understand how gravity works.

I feel for her too; I hope she paces herself.

All day I've been warning people about the Zombie Apocalypse. Looters. Werewolves. And Okies playing banjo music. I have also been threatening to sell matches, aspirin, and batteries, for thirty dollars apiece.


All in all, I am probably the very last person you want anywhere near you after an earthquake or during a civil war. Not a warm supportive person, possessed of an inappropriate sense of humour.


Marin County, as everybody knows, is the interface between the marijuana grown in the emerald triangle and the hipster city of San Francisco.
So it really is the worst of both worlds.


Some folks today have mentioned the possibility of torching and looting the mansions where the executives of Pacific Graft & Extortion live. Naturally that sounds like a splendid idea to me. And those addresses can probably be looked-up on the internet. 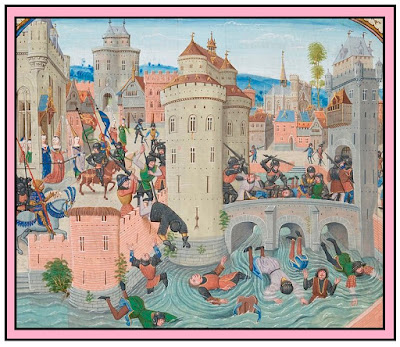 By Loyset Liédet - This image comes from Gallica Digital Library and is available under the digital ID btv1b84386043/f476, Public Domain, https://commons.wikimedia.org/w/index.php?curid=3159753


Peasant revolts are thrilling, and have my fullest support. Plus they always end so well, and afterwards everybody gets ice cream.

There's a generation out there that never knew a life without cellphones. Their juice will run out. By tomorrow evening they'll be hurting.
No Facebook. No twitter. No text messages.
No Siri. No Alexa. No Uber. No Lyft.


It really will be the Zombie Apocalypse.

Email ThisBlogThis!Share to TwitterShare to FacebookShare to Pinterest
Labels: PG&E