I REGRET MY DEPRAVITY

Over the weekend I did something so staggeringly awful that I really must apologize. Ascribe it to senility and old age (which hit me suddenly, it being my birthday two days ago), or just existential angst and pissyness.

That being the smoking of aromatic tobaccos.

Now, when people say "I just love the smell of a pipe", as so often happens, they are usually thinking back fondly to a long-departed relative who used to smoke a pipe. "Grandpa used to love his pipe." "Uncle Alphonse always had a pipe in his mouth." "Cousin Theobald was never without his pipe." Or even an old college acquaintance. "I'll always remember Entwhistle striding off to Latin class wearing a bedsheet for a toga, with his fondest Charatan Dublin clenched between his manly jaws."

Except for that last one, the others were all diseased psychopaths huffing "Charming Cherry Cavendish" or Mixture 79. Men of no taste and ghastly pretentions, whom you should never invite over for dinner. 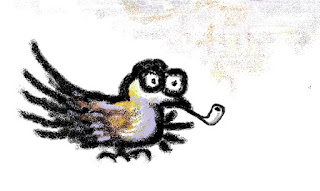 With whom I can sympathize, as I have pretentions, and nobody ever invites me over to dine, dammit. And unlike Entwhistle with his stained toga, who remarkably had the same taste in tobaccos, I never had a flock of giddy admirers (or even one of them) when I was in college.

Entwhistle was naked under that bedsheet.

Unfortunately, I have forgotten Entwhistle's real name. He's probably teaching the Classics somewhere at a private school, with expressly stipulated in his contract that vociferous anti-smokers will be thrown to the lions. Precisely like they used to do in Roman times.

Back in that day, I usually smoked Drucquers Mixture 805, or Trafalgar. Occasionally Arcadia, Red Lion, Levant, or Royal Ransom.
All of which were Latakia mixtures.

Aromatics, which "smell so good", and are the stuff of a girl's fondest dreams of hairy machismo, were from the dark side back then.

You know sumpin'? They still are.

After sniffing at a few of the open sample tins, I selected two which weren't too objectionable, and looked rather interesting. No women complemented me on the smell, and my mouth ended up rather uncomfortable.
Neither could ever be a desert island smoke.
Still, not too damned bad.

Fairly coarse cut, speckled tans and blacks. Because I had suggested to two members of the pipe club that they should smoke this, I felt honour-bound to give it a try myself. Interesting. But I didn't finish the bowl.
There wasn't enough there, there.


SUTLIFF'S COUNTY CORK
Burley and Virginia with some whiskey dumped on top.

It felt sticky to the touch, so there's more than just whisky in it. Smelled sour and sweat-socky in the can. But after four eight second pulses in the microwave it was dry enough to smoke. Not a bad mixture, if you're an old fossil from the Eisenhower years, and very similar in general taste to a lot of the mixtures that were common back then. Like most Burley mixtures it pulled a number on my mouth. I didn't finish the bowl.


Neither are anywhere near as horrid as Mixture 79 or Molto Dolce, which are made by the same company.


If you really must smoke Sutliff, both Berkshire ("a rich English mixture of Latakia, Oriental, Virginia, and Perique") and Bosphorus Cruise (Latakia, Turkish, Virginia) are exceptional, and I highly recommend them. 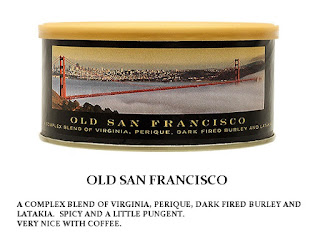 Sutliff's Old San Francisco would've either pissed-off the former owners of Grant's on Market Street, or pleased them no end. Grant's was the one remaining decent tobacconist after Marty Pulvers sold Sherlock's Haven.
I bought most of my stockpile of tobacco there, till they closed in 2012.

[Sutliff sold their San Francisco store to Ed Grant back in the fifties.]

Apparently the smell of people smoking interfered with the studies of the men and women at the "Beauty Academy" three floors up in that building.

Tobacco, as everyone realizes, is disliked by the entitled people in Marin, San Francisco, and Berkeley. And smokers are thoroughly evil.

If you have to smoke, smoke marijuana. Or crack.
Both of those are therapeutic.
Safe around kids.

Email ThisBlogThis!Share to TwitterShare to FacebookShare to Pinterest
Labels: Sutliff

I like my whisky separate from my tobacco. Wish tobacco manufacturers would remember that..

Well, combining them in one product doesn't really work; the whiskey promotes drying, and you'll end up with desiccated shreds. Though with many Sutliff blends that isn't an issue.