GO AHEAD, BEAT THE KIDS!

Video from Hong Kong shows "kids" throwing molotov cocktails at the police, setting fires, and bullying people. The leaders of the violent mobs vandalizing things and rampaging are "kids". The biggest thugs at many of the demonstrations are "kids", and the vanguard of clashes in the metro stations are "kids".

This blogger is as soft as the next man, but having been a kid myself once , I do not labour under the misapprehension that kids are innocent little puppies who just need patience and understanding.

The Red Guards fifty years ago were "kids". A nastier bunch of teenage and early-twenty-something hooligans would be hard to find.
Much like their Hong Kong kin of the modern age.

The Nazi Jugend were kids.

As Hong Kong's protests deepen, one pastor and a group of mostly Christian volunteers are trying to stop clashes from happening.

Protect the Children volunteers put themselves between protesters and police.


Well, okay. And after that, we beat the kids, right?


Some of the worst "kids" at these "peaceful protests" have been vile-mouthed harpies in their teens wishing death upon the members of the riot squad, in several colourful and unprintable ways. The HK riot police are a remarkably patient lot. Those "kids" need a good spanking, and their parents should be lectured about raising such worthless children.

You know, there's almost nothing more repulsive than a shrill Cantonese female person cursing at the top of her lungs. The only thing that keeps the riot police from arresting such "kids" is that they would then have to listen to her all the way back to the station.

It's incredibly hard to believe that they're really out there for "democracy" and "freedoms" when every other word out of their mouths is "pok kai", "nei lo mo", "sei lo kwai" and similar filth. Sometimes Hong Kong females are the worst bitches imaginable. Pardon my French.

[Pok kai: 仆街 "hit street", meaning that you should fall over dead on the public thoroughfare, from disease and starvation or whatever, with no one to concern themselves about you or ensure a proper burial. Nei lo mo: 你老母 "your old mother", short for 屌你老母嘅臭閪  "intercourse your old mother's putrid orifice" (yeah, I'm circumlocuting here, it's impossibly foul). Sei lo kwai: 死老鬼 "dead old ghost-daemon", damned old bastard.] 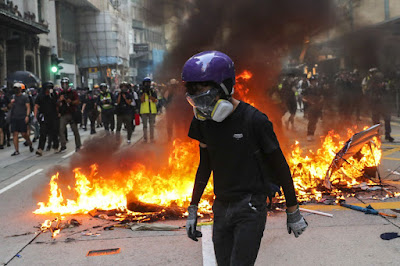 
The eighteen year old student protester who got shot last week -- the first such incident in over seventeen weeks of increasingly violent peaceful protests -- was attacking a police officer with an iron bar, after one of the officers had been stabbed during an attack by peaceful protesters.

Cite:
"Video footage taken by the City University Students’ Union Editorial Board showed a number of protesters ambushed an isolated riot police around the corner of Hoi Pat Street in Tsuen Wan. They set on the officer, beating and stabbing him after he fell on the ground. Another officer rushed to his aid but was stopped by two rod-wielding protesters. The officer pulled out his service revolver and pointed it at them, issuing a verbal warning. One struck his right arm with a rod and the officer opened fire."
End cite.

An eighteen year old wielding an iron bar while participating in a riot is not an innocent little child.


So go ahead; beat the damn' kids.
And the Christians too.

Email ThisBlogThis!Share to TwitterShare to FacebookShare to Pinterest
Labels: 香港