HEY, I KNOW THIS PLACE!

For much of the past week I was in my underwear. And, when not at work, and after my apartment mate had retired to her room, only in my underwear. Because of the heat. Believe you me, not a pretty sight.
No man is beautiful after his early thirties.
Unless you're drunk.

If you went to a dive bar in Chinatown, you might well have ended up that way. And wearing only underwear. At Northern Station. Where they're still wondering about your account of events. 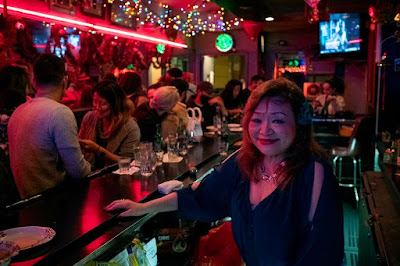 
[SOURCE: How a 33-year-old Chinatown dive bar gave us one of the city's most beloved figures: Mama Candy.]

Okay, who let the press know about this place?

When the Loma Prieta Quake hit three decades ago, Candy Wong went across the street and borrowed the generator. At nine o'clock that evening, when all of Chinatown and North Beach were dark, there were four places open for business. Stinksy Rosie (not its actual name), Sam's Burgers on Broadway, and the Vietnamese place next door to Sam's.
All three had gas grills and candles.

Bow Bow was also open. That generator. Lights. Music. Ice. Chilled drinks. Booming business. Till the cops shut it down because martial law or sumpin'.

I never go commando. Unless I'm in my pajamas or showering, underwear is always in play, along with relatively clean overwear, and at times outerwear.
I must clarify this, because I do want you to get the wrong impression.

There was one time a man came into Bow Bow wearing only his underwear. Candy threw him out, because there was nowhere he could stash a wallet, and she didn't know him.

Well, no visible place. Tidy Whities do not have pockets. And these were tight and somewhat worn. Honey, I don't wanna know where your money is, but if it's near your Marlboros, keep it there and shove off.

No shoes, no socks, no slacks, no way.


Unless we know you.