It was inevitable that, to piss off China, the United States Congress passed "the Human Rights and Democracy Act", ordering an annual review of Hong Kong's autonomy and human rights. If the standards of that bill were applied domestically, Texas and Alabama wouldn't make the grade.
Among several other places.

As part of the bill, participation in "protests" is protected; Hong Kong residents can get visas even if they were arrested.

Presumably, even if the apprehension was for throwing petrol bombs and stabbing police officers. The first happens fairly often, and it is doubtful that we would want such people travelling to the U.S., the second is still rather rare, although swinging iron bars with intent to hospitalize a cop is a frequent occurrence. Along with, generally, missiles and mayhem.

Characterizing the protests as "peaceful" is not correct.
Indeed, the rallies start peacefully enough.
Then turn into battles.
Riots.

Only the last two demands are legitimate, the third one is arguable, and the first and second demand are self-serving weasel words, because any event at which the participants use incendiary devices, set fire to metro stations, trash businesses of which they disapprove, and swing cudgels or metal staves at other people is, very clearly, a riot.

When Molotov cocktails (汽油彈 'hei yau daan'; petrol bombs) are thrown, it's a riot, and people naturally will be arrested, if necessary with forceful methods, then prosecuted and sentenced.
It really is that simple. 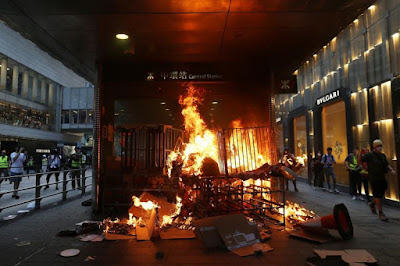 
Peaceful protests do NOT include arson. Ever. That's Oakland.

Email ThisBlogThis!Share to TwitterShare to FacebookShare to Pinterest
Labels: 香港