A good friend in the academic/anthropologic/ancient digging world forwarded a meme about Indiana Jones and realistic story lines versus what Indy usually does, which reminded me of Chinese urinals.

In a martial arts movie set during the Chien Loong years (Qianlong Emperor 乾隆帝 'kin lung tai', 25 September 1711 – 7 February 1799), one of those things was underneath the abbot's bed, and got used as a missile, hurled back and forth, during a fight scene. The humour being that nobody dodging it, catching it, or flinging it, wanted it to overturn or crash.

Years ago at a Chinatown shop catering to the tourists, some customers saw a row of those things. They were the cheap countryside version, slabs of coarse earthenware, and angular. They didn't know what those things were, neither did the shop staff. Perhaps they were meant for tea?

I could understand why none of them were familiar with the item in question, it's not part of the urban bedroom landscape. Though very useful. 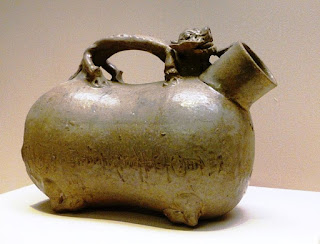 Makes a great paperweight. The versions on display at the shop were coarse earthenware, low-fired, and heavy. Not suitable for tea, even if you were "inventive". And in the dark. The merchant that bought them for sale to the tourists probably did not know what they were either, just saw them and recognized that they were old curiosities, and unbeknownst to any elderly relatives decided that they were worth one hundred and twenty dollars.

You could also use them for your long-stemmed oil painting brushes, or, and it would boggle the mind, storing your bundle of cheap plastic souvenir chopsticks on the dining table. Keeps the brocade tablecloth from sliding.
Which you bought during that same vacation.


If there are any antiquarians or know-it-alls among the dinner guests, they should kindly keep their mouths shut. As a simple courtesy to their hosts.
Really, it's absolutely the polite thing to do.

My compliments to the cook.

It was a lovely meal.