Today I'll try to pay as little attention to the internet as possible, largely because of the sheer waves of stupidity rolling in from that direction. Ignoring that is good for my equilibrium.
The alternative is spending too much time fighting the urge to tell many people to go intercourse themselves, especially Pakistanis. And while doing so -- especially to opinionated Pakistanis -- is also good for the equilibrium, one would be tempted to ask them where they live in Fremont, so that one could go over there and forcefully impress upon them what a bunch of festering bunts they are.

Rhetorical question: Why is it that so many Pakistanis hold strong ill-informed opinions about matters that do not concern them? Or express themselves in the most insulting racist terms?
The other group of ill-informed bhainchotes with strong opinions is Republicans, many of whom are loathsomely fundamentalist Christians, but seeing as so many of them can't read English, telling them where to stuff it has little effect.

Instead, after finishing my coffee, I shall head out into the howling gale to enjoy a smoke. 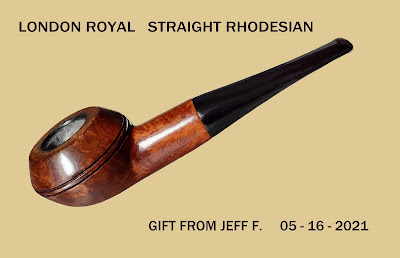 Aged flue-cured tobaccos with a modicum of Perique, in a pipe which a friend gifted me this past Sunday. He knows I have a peculiar fondness for squat bulldogs and Rhodesians, and this pipe perfectly represents the overlap of both those shapes. It will be the second time I smoke it. It still has a suggestion of the Latakia blends which he has enjoyed for decades. I do not mind the ghosting. I used to smoke Latakia blends exclusively for many years, and I still love the fragrance of such products when someone else is indulging.

A squat straight Rhodesian is a perfect book-reading pipe, far more so than a churchwarden or full bent, such as many Gandalf wannabees and hobbitophiles might smoke. It does not get in the way of flipping pages, nor does it require one hand to always hold it. This particular one is an item that Clark Gable or William Faulkner would have liked, although both men are pictured with a straight billiard far more often than anything bulldoggy.

Clean clear old briar of a nearly unknown make. The name stamped into the shank ("London Royal") indicates that the manufacturer was LH Stern (LHS) in Brooklyn. Which I found out by perusing the Reborn Pipes site, which directed me to Logos & markings, from which I quote: "The L&H Stern Inc. was established by Ludwig Stern (1877-1942) in 1911. His brother Hugo (1872-?) acted as vice-president & secretary. The firm moved to 56 Pearl St. Brooklyn in 1920. It closed down in the 1960s. LHS was one of the main pipe suppliers for US soldiers during WWII."

The entry in Pipedia for LHS is absolutely fascinating.


When I get back my apartment mate will have already left for work, so any further smoking can safely be done with the windows open and her bedroom door closed, before at the latest two o'clock. Which, given that it has been cold and windy, is a jolly good thing.


I feel that it will be fitting to have this pipe with me for my next doctor's appointment at the end of July, as well as my cardiologist's appointment in August. It feels comfortable in the hand. Profoundly reassuring. Totemic. A good luck charm.
Suitable for a stubborn man.