YOU WANT TO EAT!

A popular chain of restaurants in Hong Kong states that they will not take customer orders except in Cantonese, claiming that this is because not all of their wait staff speak Mandarin, and they cannot explain menu items for a Mandarin speaking audience unfamiliar with HK food. There is speculation that their refusal to serve a Mandarin-speaking clientele is because of fears of the corona virus (Wuhan pneumonia, 武漢肺炎), OR a bias against mainland visitors and their snootiness.

Either way, it's pissing people off.
Mostly Mandarin speakers.


I think I'd be fine there, as I can order what I want to eat in Cantonese, and am more than passably able to read menus written entirely in Chinese. Which is what I will be doing tomorrow, on the first day of my weekend. I am not a typical Anglo, nor a mainlander. There are few real linguistic barriers to the smart-aleck Brabander in search of something good to eat.
And living near SF Chinatown. 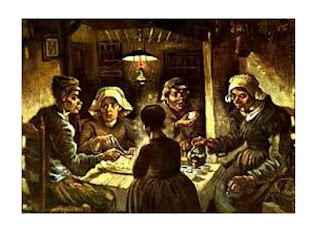 In the century since Vincent Van Gogh painted the picture above, we've discovered bami goreng. It's pretty much the Dutch national dish at this point. Along with very many iterations of unidentifiable fried object.

Here's a list of items with which the average educated urban (and urbane) Brabander ought to be familiar: Tastes Good. I would like to see this as part of the curriculum of every grammar school, with good reason.
Proper eating is extremely important.