A peculiar neurotic habit I have when waiting for the bust to work is counting how many dogs being walked I can see, as well as little kiddies and their adults who are unmasked. If they're Caucasian, ninety nine times out of ten neither the tykes nor the irresponsible adults are covered. From which I conclude that white parents consider their offspring expendable. Which they very well may be. They certainly aren't unique or precious. Sad.
But stupid white folks are indeed a renewable resource.
We aren't likely to run out this century.

Bear in mind that there is no racism in this statement. I am Caucasian.
My kind have produced Louie Gomert, Donald Trump, and MJT.
Plus whole hordes of equivalent garbage.
Repeat: renewable.
Dammit.

[Naturally almost all of the unmasked travellers on the Golden Gate Transit buses are white. Proves my point nicely. Same with SF MUNI. It's like boarding a petri dish on wheels. Or living in Florida and Texas. I see stupid people. ]

On the way back from work there were over twenty unmasked white people on the bus. Most of them tourists. Why is it that the ONLY people to consistently mask up and take precautions for themselves, their fellow passengers, and their kiddies, are East Asian Americans? Why?

One particular specimen took a seat right behind me. My age, but unkempt, smelly, muttering to himself and grunting, and occasionally asking people for coffee. I moved.
When I got home my feet hurt and I was in an atrocious temper.
I should really get that peripheral angioplasty rolling.
And spray Febreze at random people.
Or Bactine.

I have it on good authority that if you spray both Febreze and Bactine at tourists they go back to Texas or France. And some of them just dissolve (poof !) into a cloud of sulfurous smoke.

Underneath a recent post (Palmetto Balkan Review) a reader (Baby Harp Seal) said... "Dude. Couldn't wait, eh? What's with the weird reference to seal script in this review? Also, two misspellings in this morning's blurble. I am surprised."
End quote.

The accusation "couldn't wait" probably refers to the quickness with which I smoked a bit of Cornell & Diehl's limited edition blend Palmetto Balkan, seeing as it wasn't released till the eighteenth of May (five days ago) and immediately purchased three half-pound cannisters. Somewhat unseemly behaviour, perhaps, let others also have a crack at it. Damned good stuff. Since acquiring those three cans I've smoked a whole lot more from the open sample tin, and in all honesty I'm perfectly comfortable not letting many people have a crack at it.
Too many hipsters and smokers of shite out there. Yes, I love all of my fellow briar enthusiasts, but no. Many of them are hosebags with low standards.

The "weird reference" to seal script in that essay is because I'm presently revisiting a favourite subject, in an obsessive way. As I do with many of my favourited subjects. Such as pipes and tobacco, for instance. And surely you noticed the terms "evocative, rich, and stimulating" as well as "a depth and strength that's altogether extraordinary"? This also applies to Palmetto Balkan. For the last three days I've been smoking nothing but.
It's good damned good stuff. 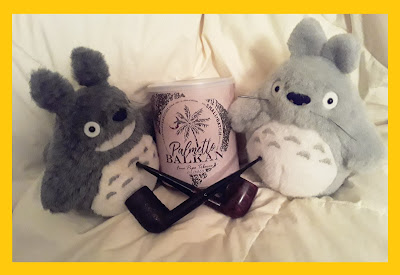 As some of my friends will agree. They are unique individuals with excellent taste.


Regarding that tobacco, note that JimInks has also already reviewed it.
He says it can be an all-day smoke.
He's right.


As for those misspellings, I have taken care of the problem. Let us not speak of it again.