HOW WE WON THE WAR

Because I'm on the schedule for tomorrow I tried to get everything done today. And did. The veritable peak of efficiency. I'm a "necessary task god". You may now light incense.
A logistics genius too. I pat myself on the deserving back.

Early lunch. On Thursdays the soup is corn chowder (粟米忌廉湯 'suk mai gei lim tong'), on Wednesdays vegetable consommé, and on Tuesdays Hong Kong borscht (羅宋湯 'lo sung tong'). That latter, plus the garlic baked porkchops (蒜蓉焗豬扒 'suen yong guk chü baa') and rice, and a cup of milk tea (一杯港式奶茶 'yat pui gong sik naai chaa'), prepared me for the hike over to the office building as well as the subsequent jaunt to a smoke-filled room.

The porkchops were excellent. I had forgotten that.
Maybe I'll have them next week also.
In lieu of 龍脷魚 ('lung lei yü').


You know, sometimes I wonder what Chinese people think about us Caucasians. There was an old woman wearing next to nothing, nipples hardly covered, asking for a cigarette outside on the street, a chap who looked like Gandalf gibbering and gesticulating at Grant and Clay in Chinatown, and a drunk rolling around one block further down. Nine people on the bus back home in late afternoon had no masks on, and of course they were all white too.

Perhaps the local Chinese wonder if we're ready for adulthood yet, and how on earth we won the war.

That's what I often wonder also.

Of course, I usually wonder that in Dutch or English.

No wonder we invented penicillin. And intivirals. White people (especially tourists) spread disease. That's how Covid became an issue, and why it remains an issue.
Nuking Mississippi, Oklahoma, and Texas might slow it down.
Just like Trump suggested with hurricanes.

Two of the three tasks I needed to do involved native Chinese speakers, only one required English. And riding the bus required English, because there are so many of those people.

Also on the plus side, I got to smoke among an agreeable bunch of people. We were saying farewell to one of our number, who is moving up to Seattle to get off his feet after more than forty years. Which is understandable, but we'll miss him. 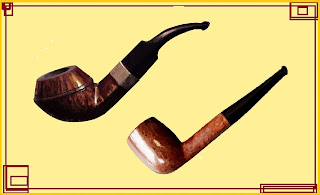 Good conversation. Kirsch, we concluded, is virtually useless. As is liquer based on Bourbon. However Grey Goose vodka is excellent for cleaning tobacco pipes. "But you could add tonic and ice cubes." "Or use it to clean pipes!"

I enjoyed both of the briars pictured above during the afternoon. One of which conceivably contributed to our winning the war. My father smoked it as a bomber pilot with the RCAF.

Porkchops and borscht may have also played a role. But tonic probably was a factor in blackwater fever among the men, both during and after the war.
The jury is still out on the part vodka played.
It's a partisan question.