It should have been a nice dream. Somewhere similar to a square in Valkenswaard near the cigar factory, autumn, dried leaves and mist, and a burger joint on one of the narrow streets leading out. Except, of course, that the burger joint never existed there, and an artistic person with whom I remember quarreling several years ago ran the place.
And what I really wanted was sorse ilish.

It should be axiomatic: don't rely on a Brabander for sorse ilish.
It isn't, only because most of them have never heard of it.
Sorse ilish is quite unknown in that region.

It was thanks to two gentlemen who commented under a recent FB post that I could not get sorse ilish out of my head. 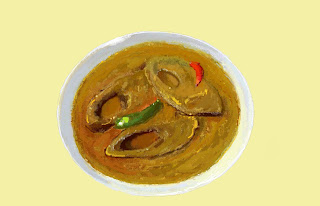 Which was not on the menu. Because the quarrelsome one ommitted it.
She had probably deliberately done that.

Sorse ilish is in the same general category as macher jhol. Which, not surprisingly, was also immensely uncommon in Valkenswaard et environs. Not unlike San Francisco, where one will seldom find it either.

One could blame the quarrelsome one, but that would be off target.
She probably has nothing to do with that state of affairs.


Here it is, several hours later, and I am still thinking of sorse ilish.

The classic Bong preparation must include Kalonji seeds in addition to two kinds of mustard seed. And don't use too much turmeric! It isn't particularly hot. A person from Brabant would probably experiment with adding Tierenteyn prepared mustard as a creative shortcut. As well as, perhaps, a smidge of Grey Poupon. But these are heresies to the orthodox.
Serve it with some brinjal and steamed rice.


NOTE: Many fish preparations are better with turmeric in the sauce, but one should not make them bright yellow by its use. A little improves the flavour, a lot ruins it.