Reading about women pipe smokers, who are rare, and other than a few freaks who want to be Gandalf, smoke good tobaccos. Either Latakia mixtures or matured flakes. Like a friend located in North Carolina, who photographs her cats, pipes, and husband in the same alluring pose. She graduated from Cherries effing Jubilee to the side of light over the years. Except for the occasional bowl of Hallowe'en Fruity Spice Gasm, which chases the cats and husband out of the house and ghosts her pipes and the drapes, because she worships at the altar of the Great Pumpkin, and has a thing for the season. I've heard she also like candy corn.


The best smokes of the day are late at night and early morning, when there are almost no maskless cretins about. Dinner time, however, is lousy. 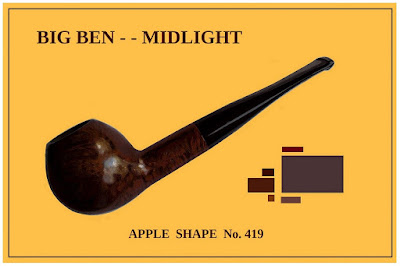 Yesterday I mentioned that I will fondly imagine someone saying "that tobacco smells so deep and mysterious", when I am outside smoking. Which really applies to pressed Balkan blends, precisely like Penzance (Esoterica). Greg Pease's Lagonda and Quiet Nights are similar, and are just as quite exiting. Chelsea Morning is in the same style, but a bit lighter (and therefore more complex; more of a spectrum to play with, recipe-wise). These are all incense like, perfumy. Pressing changes the complexion of Latakia markedly, and softens it.

Though nowadays I smoke different tobacco blends entirely, I still love the aroma of a good Latakia mixture.

Another fantasy is that some intelligent and perspicacious young lady will develop a liking for Virginia and Perique compounds. Which really do smell old-fashioned and comforting, precisely like home. The warm kitchen, the booklined study or private library, the back garden in late summer when the apples ripen.

Late summer this year in San Francisco is colder than in previous years; by seven in the evening the fog starts drifting in, the top of Nob Hill turns grey.
I wonder if the loquats have ripened yet.

Both Big Ben apples pictured above were purchased on Market Street when I still worked for the toy company. The Charatan bulldog was acquired when I was in the accounting department of a law office, on California Street. They are comforting pipes, happy pipes.

Irrelevant observations:
When it hits roily-boil, the saponins make it foam up.
The best kind of bread is cheesy bread.


I honestly cannot understand the appeal of aromatic tobaccos, with added flavouring; it's like American tea blends or candy-liqueurs.
Why would you do that to yourself?