WHAT HAPPENS IF NONE OF THEM CAN ACT?

It would be dishonest to say that superhero movies bore me; I haven't seen enough of them. I did see two Spiderman movies many years ago, because the company for which I worked treated us -- it was either that or stay at the office and work while everyone else overloaded on the popcorn -- but all I can remember is that the premises were ridiculous, as were the stories, but one or two of the actors seemed likeable.
Superman, Batman, X-men? Nope.

Sadly, I haven't seen many of the Godzilla movies either. Saw Mothra, found it cheesy and sort of amusing. Also saw Matango, in which parasitic fungi take over the bodies of the hapless crew. The word 'cheesy' is more than appropriate.
Delicious!

As a Dutchman (Netherlandish American) I think I can claim to know cheese. Perhaps that's why I rather like the Japanese super-atomic-monster movies (mmmm, blue cheese!) but despise the American fromage films; strictly factory pocess sliced barfo. 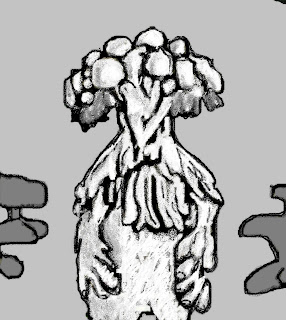 Whereas Matango and similar flicks are art!

Shipwrecked on a mysterious island, everyone eventually ends up as a bestial mushroom. Dangerous, violent, and driven by instinct to attack those who are less fungal and infected.
Is it a metaphor? A romantic comedy? A nightmare?
Kind of disgusting and sad.

Perhaps it's just a good excuse to hunker down in front of the tube in your pajama pants and flip-flops snarfing delivery sushi. Pass the Pocari Sweat.


Who was that major drip in Spiderman?