Fortunately today the zombies didn't come. The presence of a few ghouls scarcely impacted my work; they may have learned by now not to make me growl. That said, I was still kinda bushed by the time I got home. I'm glad I'm off work for the next few days. Neil, who visited around mid-afternoon, was a bit staggered by the very English habit of adding milk to tea, and amused by the question "before or after?" As in do you want the milk poured into the cup before the hot tea or afterwards, which must make sense to an English person, but in the context of both masala chai and Hong Kong milk tea is less than fully relevant. Masala chai has the milk and tea simmered together, with fennel seed and cardamom, whereas HKMT might have the sweetened condensed milk added to the saucepan before the repeated straining for that velvety mouthfeel, or stirred into the hot liquid afterwards.
The jury is still somewhat out on that. Opinions are strong.
And he prefers his tea black, with honey.
So it's a moot point. 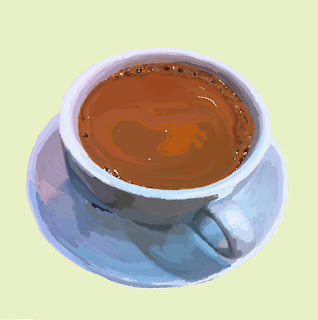 It's further moot because I do not swill HKMT at work, but strong Pu Erh. And I shan't acquire a can of evap to put in the fridge there. The HKMT is a thing for my days off, a civilized habit around teatime (which is four o'clock, more or less). Something the sour old farts I deal with would not understand as they are more likely to swill whiskey at that time while spewing foul language.

Sometimes I feel like I'm in the monkey cage at the zoo.