It does not, from my Western perspective, look potable. But it's extremely popular. I have never tried a taro milk tea with sago pearls, and because I associate that colour with cheap grape flavour, candy, and space monsters it's unlikely that I will anytime soon. I have tried the matcha milk tea (without the indigestible round things), and I cannot say that it's a favourite of mine. Might be a long time before I do that again. Strong Hong Kong milk tea, no boba.


From a safe distance, those big taro pearls look like the monster was not entirely osterized, there are little bits of him settling on the bottom. I know from experience that they're difficult to reduce to a digestible substance -- it may be my teeth -- and they sit in the stomach for hours, little clots of havoc. 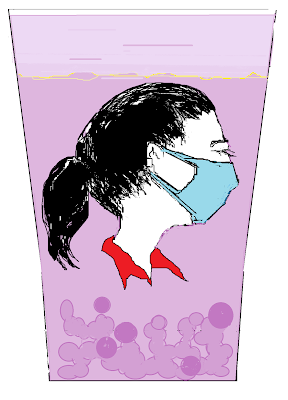 Two gentlemen to the right, at different tables, were having toast. An older woman to the left was having some chow fun and a cup of tea. Older brother uncle (meaning a gentleman of not entirely kosher status and "influence", who is of an avuncular age) was at the next table over with a friend dining very well. And an American Chinese woman seated straight ahead was eating something with meat and tomatoes, and had not until mere moments ago known what those things were called in Cantonese (番茄 'faan ke').


I've seen chow fun auntie before a number of times. She also often eats lunch at the place where I get dragon tongue fish with rice (蒜蓉焗龍脷飯 'suen yong guk lung lei faan') nearly every week. She's seldom alone, and her son will pick her up with the car.
Yesterday I noticed her elegant gold earrings.

I know from listening in on conversations that her surname is Low (盧 or 魯 also maybe 羅). I've never introduced myself because my Cantonese is quite lousy, but I've heard her speak. Clear understandable city Cantonese, with an old-fashioned formal quality to it.

[If asked, let's just say that my name is 麥 ('mak'). It's more convenient to leave it at that. 叫我老麥就得㗎喇。]

As for the ladies who ordered taro milk tea, I did not notice their jewelry at all, and their surnames I do not know. I was fixated on their purple effluvium.
That was probably what Prince sang about.