Rudy Giuliani got randomly slapped over the weekend at a supermarket; oh the horror and outrage! "It felt like a gunshot." Yeah, well, um. I'm afraid I cannot feel sympathy for him at all. Perhaps if you slapped him again? Repeatedly? This time use a baseball bat. The problem with those Republican hosebags is that they do not feel things like normal people.
They're kind of insensitive. Almost to the point of stupidity.
It's all that cocaine.


"I’m a 78-year-old who’s in pretty good shape, because if I wasn’t I’d have hit the ground and probably cracked my skull."

In all honesty, I am disappointed that the perpetrator got caught and didn't draw blood. Rudy Giuliani should be in the slammer, and like his buddy Epstein should not commit suicide. 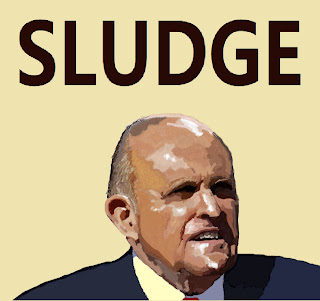 In a just world and a well-run country, that would happen.


Before he doesn't commit suicide he should be brutalized with the butt end of a tennis racket in the minimum security facility where we put influential people like him. That would be very 'preppy', and very appropriate.

A whole bunch of Republicans should not commit suicide.
Precisely like Jeffrey Epstein.

Turns out the security video tape of the incident shows a mild almost avuncular pat on his back, which had no or scant impact. Giuliani didn't flinch, and barely registered it. Words were exchanged in passing afterward, which were possibly hurtful criticism.
To which Giuliani reacted like a typical a**hole New Yorker.

Two conclusions:
1) Giuliani is a lying sack of sh**. But we already knew that.
2) Next time, maybe use a baseball bat. Or a tire iron.