This blogger admits to a soft spot for geeks. Trekkies, Manga and Anime cos-players, folks in sexy nurses outfits if they're male and gaily prancing around college towns or Polk Street. Even the role playing games people. No, don't ever want them in the house, but they're fun to watch from a safe distance. Everyone except the Starwars nazis. They're disturbed.

Oh, and those Lord of the Rings eejits.
Offensive Elvish vermin!
Hates 'em!

So I can thoroughly appreciate this thing: 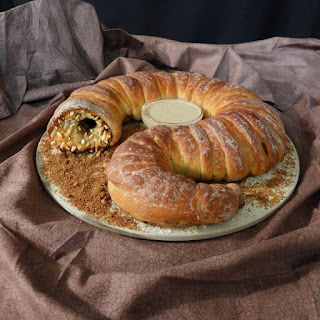 I stand in awe.

Actually, I sit in awe. Smoking my first pipe of the day. Which is NOT a faux Gandalfian long-stemmed churchwarden, but a Peterson bent bulldog, and NOT filled with Hobbit's Weed (two parts BCA, one part Lane Very Cherry, and one part Sutliff 1M) but Samuel Gawith's Golden Glow (mellow blond Virginia, raggedy flakes, that need a little rubbing and drying before filling the bowl) which Tolkien might have liked if he wasn't such a freak, what with his forays into the perversion of Erinmore Flake and Gold Block.

There is evidence that Klingons like SG's Golden Glow.
And Fribourg & Treyer's Golden Mixture.
As well as Capstan.

Altogether, I am rather glad that Kitchen Overlord (Chris-Rachael Oseland), the blogger who invented Sandworm Bread, is based in Austin, a place that I will never visit. She's probably scary. In San Francisco we have too many strange foodies anyway; there's a club devoted to durian, as well as mediaevalists eating swan roast and stale-bread porridge.

P.S.: Sherlock Holmes fans, especially pipe smokers, are also offensive, a humongous pain in the sphincter. More so if they wear Deerstalkers or Inverness Capes and smoke a calabash pipe.