REALM OF THE LIZARD KING

As you've probably realized by now, a number of the people I know are pipesmokers. Which excites the ladies, oh my heavens yes. I am probably the ONLY pipe smoker for miles around who is NOT pursued by dozens of hot mid-twenties to mid-forties brilliant female authors of murder mysteries and medical textbooks. It's discrimination against Dutch Americans.
They still haven't forgiven us for the Hans Brinker episode.
Or inventing donuts.

In any case, as an insight into the fabulous world of pipesmokers, let me introduce you to the most realistic series about them. Giant Radioactive Lizards Eloquently Discuss Collectible Tobacco Pipes.

Also known as LIZARDS AND PIPES

It's based on true events.This episode, of which I paste two out of eight panels, centers around chewy sweet tarts as a solution to problems.
Which sounds mighty tempting to me too. 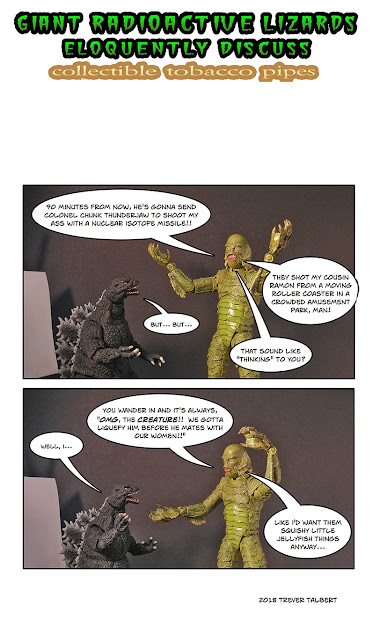 Click here to read the full episode: The Giant Claw


It's the thinking reptile's comic. We shan't mention the squishy little jellyfish things. We weren't that interested in those anyway.

Unlike Trever Talbert, I don't have any Giant Radiactive Lizard action figures. Instead, I've got three manga dolls, plus Hell Boy, a primitive wooden statue of a sea captain wearing a lavalava and beads, and a stuffed armadillo.

Trever Talbert probably has mobs of brilliant women beating a path to his door. He grasps the female psyche.