YOU HAVE LOVELY FISH

The food was good, no doubt about that; but what I remember perfectly was that the waitress spoke perfect Antwerpen dialect with her coworkers and the customers, and city Cantonese to my companion. Yes, that was during the years when I was involved in a relationship. My companion, Ms. Savage Kitten, did not speak city Cantonese, but her parents home town lingo, Toishanese. Which I do not quite understand. It's dense.

What with being white and only halfway conversant in city Canto, HK style.

Subtitles help. As with the Scots.

When I returned to the States years ago there had not been many Chinese in the Netherlands, but of course years later those few adventurers that had been there had established families, had children, settled, flourished.
Here in San Francisco we count it as quite normal that people of Chinese ancestry should sound like New Englanders or Valley Girls; we take it for granted that many of them are "long time California", as are the Okies, Italians, Irish, and many others. I just wasn't mentally prepared for Cantonese speaking fluent Dutch. Native born.
Second, third, fourth generation.

The lovely waiter and waitress at the mussel restaurant on the Tweede Helmerstraat at the Eerste Constantijn Huygensstraat in Amsterdam, who spoke fluent Dutch and English to the customers, and Cantonese to each other, well, that may have been a fluke. But the mussels were delightful.
I remember that very well.

It is a sin not to recall the food at a good Flemish restaurant.
But I was distracted, my language quirk took over.
A Canto speaking Antwerpsch.
How marvelous!


Last night I had a dream that involved both Antwerpen and Hong Kong. Plus trams filled with unintelligible English people. Quite naturally, the dream ended with seafood. If you are Dutch, Flemish, or Cantonese, you will understand why that had to be.


No, I never eat fish and chips à l'anglaise.
I learned that lesson years ago.
It can be abysmal.


Here in San Francisco, if you like seafood, decently prepared and not overdone, you are better off going to a restaurant where everyone, both customers and staff, speaks Cantonese. Not American English. 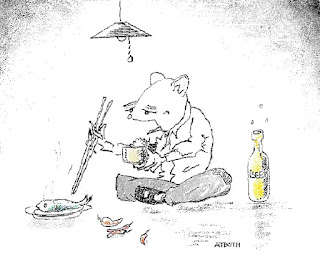 Post Scriptum: The Shanghainese and Fujianese are also excellent fish cooks, but often their food is a little too oily. Cantonese is best.
There are no Dutch or Flemish restaurants.
Which may be a minor pity.