ALL THOSE LUSCIOUS FLAVOURS!

One of my coworkers has found a clever way to avoid the lines at Starbucks as well as at chachantengs. Instead of a triple soy peach, framboise, and vanilla-caramel latte, or a refreshing cup of Hong Kong Style Milk Tea, he starts the day with a high-octane energy drink purchased at a convenience store or gas station.
All the sugar, guarana, and caffeine he needs, none of the yuppies.
Personally, I think he'll die of diabetes before he's forty.
Or a brain embolism, from the gluten.

Actually, I'm not too worried about him. He's married, and has children.
So the college years will kill him before the canned poison he imbibes for breakfast, lunch, and dinner.

I, on the other hand, am not married and have no children at all. So there are no future educational expenses to worry about. And I start my day with strong coffee and a cigarillo out on the steps of my building. Where, the other day, some hosebag gave me agida about smoking during a spare the air day. At six in the morning.

That is the same soft-in-the-head vandal responsible for pasting a wall full of berserk homemade posters where there used to be a lovely colourful mural of groceries near the bus stop, so I could piss all over his life's work if I wanted to. He calls it a shrine.


Per Ballotpedia:
"a yes vote is a vote in favor of this initiative to do the following:

A no vote is a vote against this initiative, thereby leaving in place city laws designed to ban vapor products not reviewed by the FDA (which currently includes all e-cigarette products) and flavored vapor products starting in 2020 and leaving current regulations and restrictions on vapor product vendors and advertisements."
End cite.

My fellow citizens are too uptight and judgmental, in several politically correct ways. If your grandma wants to blow out something that smells exactly like the barista's abortions, let her. You do know that the entire city reeks ferociously of pooh, pee, and pot, don't you? A little bit of rancid raspberry steam won't do any harm, and can't even compete against the tonnes of Chanel and Aramis you blisters wear to work each day.

Neither will tobacco at six a clock in the morning. 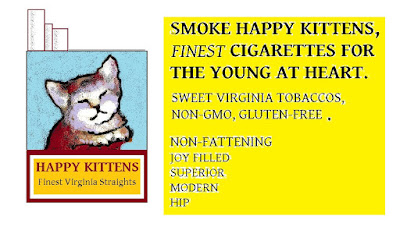 By the way, more doctors smoke Camels than any other cigarettes, and to maintain your youthful girlish figure, reach for a Lucky instead of a sweet.
In a repeated national survey, doctors all across the country, and in every branch of medicine ....

As far as vapes go, the world is crying out for an essence flavoured with bergamot, neroli, lavender, and accented with oakmoss and vanilla.
A truly masculine scent, but soft enough for a woman.


Peach vanilla strudel is for sissies.