In what must come as a disappointment to readers, breakfast includes no bacon or fried substances, and there won't be sprightly dancing. As usual.
I tried the typical fried breakfast once or twice, English-style, as well as the dancing bit, but concluded that as I am not a farmer and don't have to bale hay or lift cows early in the morning, neither was suitable to start the day.

Years ago, no pills.


A while back I experimented with both Oliva Connecticut robustos and also products from My Father Cigar Company (Flor De Las Antillas, Le Bijou, La Gran Oferta) as breakfast cigars, as well as La Gloria Cubana Wavell Maduro, and concluded that all of these are good with coffee.

My apartment mate would disagree.

What with being Cantonese American, and having a bunch of rowdy stuffed creatures who live with her in the other bedroom who generally speaking disapprove of my habits, the only time I get to smoke inside is when she has gone to work during the weekdays that I am off, such as today, and the door to her chamber is firmly shut. At other times, a robusto would have me out on the front steps for an hour frightening joggers and little children with my frightful smell and Caucasian fearsomeness.

Which I don't mind. Joggers are irritating, and little children are resilient.

The sensible man knows not to piss-off a Cantonese woman. Especially one who tolerates eccentricities, and gives one the privacy one needs.
It's a harsh world out there.


My regular care phsysician is also Chinese American, and has often told me in no uncertain terms about the evils of tobacco, but unlike Cantonese women, he sounds wistful, rather than disapproving in a moral sort of way.

The nurse who takes my bloodpressure and jabs me with needles is baffled by the fact that I smoke a pipe; why would any one who isn't a crusty old farmer far out in the countryside of Toishan or Hoi Ping engage in such primitive old-fashioned behaviour? 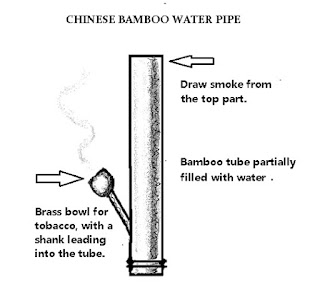 She hasn't quite grasped that my pipe is NOT a peasant bong, which I have during my occasional visits to the clinic not entirely clarified.

Where do I smoke? And how do I carry it around?

She probably suspects that I hurk down somewhere in an alley and light up. As a few old men in Chinatown near the hospital do.


First pipe of the day at present, no more cigarillos for a while. BBC News and Politico on the internet. The Dutch newspapers hardly mention Trump, except when speaking of the genocidal activities of the Turks and the obscene joy of the Russians at what is happening.

And nowadays, a political statement.

A few hours ago my apartment mate was in the kitchen, making breakfast. She's a hearty eater at that hour, and makes a racket. As all breakfasteers often do. She used both the oven and a frypan. There were fried smells.

It's a peculiarity of the Cantonese to start the day with a bang, so to speak. Dim sum restaurants do their best business between six in the morning and eight, when white bachelors are usually of a grim disposition, and can only stare out at the world blearily over coffee and a smoke, exiled to the cold steps outside, and wondering what went wrong, how did all these cheerful people chowing down of fried stuff take over the world, how did Trump ever get elected, what is the meaning of life, and is that a pimple?
Why is everyone so damned noisy?