In yet one more exercise in pointlessness, the interweb has decided that today is "Hobbit Day". It being Bilbo Baggins birthday or some such idiocy. So pipesmokers on various forums are posting selfies with their long-stemmed Hobbit-like pipes.
As a celebration of fictional cutesy-poo, this is irritating but harmless.

[In further reference to which, please see: Curiosity]

I tried reading Lord Of The Rings. Failed. Got through the first volume, found it pointless, got most of the way through the second, same result, did not assay the third. Had lost interest. Yeah, okay, I suppose Tolkien was a ruddy genius, fine. 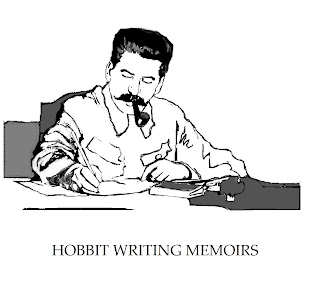 Tolkien himself also smoked a pipe. Many men did at that time. I am not vested in Hobbits, Wizards, or Orcs. Visually the movies are stunning. Precious, but stunning. Best watched with the sound off and heavy metal on the turn table.

There is no indication that Hobbits in his books smoked decent tobacco, and on the whole they seem simple-minded and rather coarse, probably much like he imagined the common people to be. So they probably smoked Saint Bruno Flake.
It's just like them.

Additionally, they seem to have had eating disorders, horrible dress sense, and were borderline alcoholics.


Tolkien probably wanted to be like that, but just couldn't make himself do it.

What Tolkien smoked was Capstan Navy Cut, a medium Virginia flake of hallowed reputation, which during his day was commonly available and often considered somewhat pedestrian. Sometimes he switched to Fribourg & Treyer Gold, and during periodic fits indulged in Gold Block (perfectly horrid) or Erinmore Flake (bizarre, but strangely appealing). I also like Capstan Navy Cut.
It's really a rather decent pipe tobacco.