LET'S NOT MENTION THE GAME, OKAY?

In essence, revolutionary thinkers, people who challenge how society does things, and argue for necessary change, are self-determined outcasts. And probably so far on the spectrum that they offend. If they're noticed at all.

“The very mechanism that made them visible, also makes the general public not want to identify with them .... their ideas are taken on board, but they're kept at the fringes of society.”


The corollary to that is that individuals on the spectrum will not see much benefit to the status quo, because it does not work for them.
And often, on a micro-level, that is evident.

Here in San Francisco there are many folks on the spectrum.

Which is why there are eccentrics at your bus stop.

Who may say interesting things.

There's also a gentleman with his pants around his ankles asleep at the bus stop. This morning his pants was further on, and he was further uphill, in my apartment house doorway in fact. I stepped around him when I left the building. Bright red pants; you don't forget that hue.
I shall not hazard a guess as to where on the spectrum he is, as he's been asleep and uncommunicative both times. Possibly the after effects of that box of donuts the remains of which were strewn about him.

As an anti-social butterfly, I prefer to ignore as many people as possible, whether out in public or on teevee. Something that inevitably freaks me the hell out is when a person recognizes me, but I cannot place them if my life depended on it. Without a context to frame them, I am lost.
Who are you people? Where do I know you from?

And why did you remember me?


"Oh yeah, that's the weirdo who speaks both Dutch and Cantonese, and knows too many useless things, most of which are boring as all hell.
Let's talk sports at him and see how fast he starts yawning." 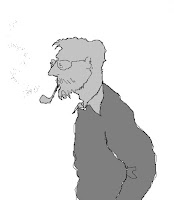 If you DON'T talk sports, or reality shows, I'm okay.
Food. We can talk about food.
Have you eaten?

Jintian wõ chi fan le. (Cheezy ungrammatical guoyu, I knw). (They didn't do Cantonese at the Unis in my province when I went astudyin over thirty yrs ago).
Aunty Kiki