YOU KNOW WHAT ELSE TASTES GOOD?

My apartment mate was an adorable little moppet as a child, as so many local Cantonese girls are. It almost makes me wish I knew her then. If we had been the same age. I was reminded of this because she was on the other side of the computer table in the teevee room drinking a big, BIG cold glass of milk. With a helping of Pie à la Mode. And whipped cream.
Which is NOT something many adult Cantonese persons do.
There is no sign of any lactose intolerance.
She's a small strong woman.
Calcium.


She's still adorable, but in a different way. In her maturity she's a kind and generous person, considerate of others, and thoughtful. An exemplary human being. Not altogether tolerant of smokers or republicans -- being among the first mentioned, this pains me -- but resigned to the flaws that other people carry with them.


The other day when I was ready to enjoy a smoke after having tea at a bakery an adorable little moppet happily started eating an egg tart. Egg tarts were not so common many years ago. The bakeries to which I went in that age usually did not have egg tarts, or Hong Kong Milk Tea. There was a range of common countryside filled biscuits, dow saa bing, lin yong bing, and such, plus truly horrendous coffee from a large boiler thing, cafeteria style. Plus cakes and a limited range of buns. What set the Chinatown bakery apart from a dim sum take-out place was fewer filled buns, plus a range of Western Style cakes. And that coffee boiler thing.

I used to worry that the coffee from those boilers was poisonous. Surely coffee that has been simmering for several hours can't be good?
What is it with Americans and their horrific coffee?

Since then I've had far worse.

Americans still have shitty coffee, but there has been some improvement. You cannot smoke with your coffee indoors anymore -- there you are, just minding your own business being miserable, and some health-yobbo will come up and demand that you put out that stogie, or go huff your pipe twenty feet away in the rain and fog and sleet -- but sometimes the coffee is indeed drinkable.

Little egg tarts are a splendid substitute for a smoke.
I'm sure that little girl thought the same thing.

I decided to have an egg tart too.


Yeah, after that I went out and lit my pipe. One of the briars for Chinatown lunting, a straight bulldog made by Amphora, filled with aged Virginia and a touch of Perique, which was a damned fine smoke oh boy memorable! 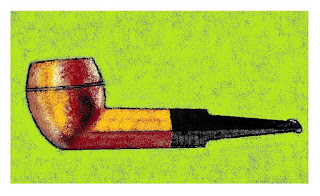