IT MAY HAVE SOMETHING TO DO WITH MANGA

About seven years ago, at the time when the toy company was transferred to Canadian ownership, and I was faced with no longer having to commute to Hayward by public transit every day (yes, ghastly, I know), I posted an essay on this blog which has in the time since then been read by innumerable people.Especially in Russia. And Pakistan.
In all honesty I cannot quite figure out why.
Dozens of visitors every day.
That post.

Okay, it's about panties. While I agree that the subject may off-put some, while enchanting others, in all honesty I don't understand why a superficial treatment of a mundane subject should attract so many readers.

My brilliant cousin wrote an authoritative book about a motif in mediaeval art, which is a classic in its field, but that one non-illustrated neutral article about the difference between types of underwear gets more attention.

An achievement which obviously ranks up there with another relative's movie that won six Oscars. Which you've probably seen.

Naturally I am more proud of his Oscars and her book than about a short piece about panties.


You've balked at the prospect of her book as light bed-time reading. Which, by the way, my aunt her mother called me up to suggest, because I am the eccentric bachelor relative who smokes a pipe and reads reference books and foreign language dictionaries for pleasure.

You're thrilled about panties.


Very well. The difference between men's briefs and boxer shorts is that tidy whities are shaped much like women's bikini bottoms, albeit with a queer opening in front whose edges overlap, and a little bit more wiggle room for certain anatomical details, whereas boxer shorts are sufficiently baggy.
And a lot more comfortable. 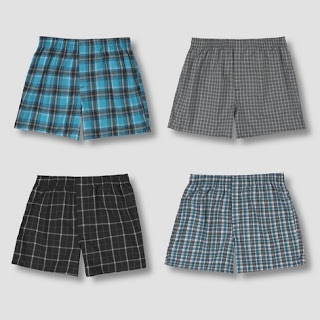 
The pantie-fascination that brings people here may have something to do with Japanese manga. In which panties play an almost dominant role, are frequently a visual motif, and usually shown occupied.

As an image, they can be charming.


I don't know, but I suspect that images of men in boxer shorts do not excite anybody, unless they have a crush on Michael Jordan. Which is very understandable, he's a good looking and intelligent man.
But it's the person, not the underwear.